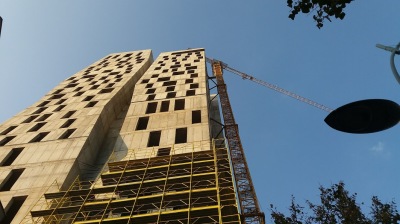 The transit trade in drugs is estimated to be worth more than half a billion euros each year in Albania — and a similar amount was laundered through the country’s real estate sector last year, says a new report from the Global Initiative against Transnational Organized Crime looking at illicit financial flows (IFFs) in Albania, Kosovo and North Macedonia.

Drug trafficking, human smuggling and illicit trade are the key organised-crime activities that result in illicit financial flows in the three Western Balkan countries, according to the report from the Geneva-based NGO.

Drug trafficking has been the most important profit centre for criminal groups in Albania for the last 30 years, with widespread cannabis cultivation in the country despite significant efforts to curb the production since 2014.

Cannabis generates illicit profits along a value chain that extends from the villagers who cultivate the crops to the organised criminal groups who smuggle and sell it across the EU. However, the profits from cocaine trafficking are far higher, reaching €20,000 per kilogram.

"In a region where the average monthly salary ranges between €400 and €600 per month, and youth unemployment exceeds 20%, the transit trade in drug trafficking is estimated to be worth more than half a billion euros each year in Albania alone," the report released on August 27 said.

The involvement of Albanian organised criminal groups along the supply chain of the international cocaine trade reportedly generates significant criminal profits in the region.

According to mortgage loans data, the report says that approximately €500mn was laundered through the real estate sector in Albania in 2019 alone.

Recent investigations also showed that €300mn is lost annually to abuses in public procurement procedures, which would be nearly 45% of the total bid value of public contracts awarded in 2019.

Corporate crime and tax evasion are also significant in Albania, with experts suggesting that nearly 80% of the imbalance between trade income and foreign exchange reserves can be attributed to over-invoicing relative to the actual value of goods and services entering the country.

Corruption and abuse of power rising in North Macedonia

In North Macedonia, illicit financial flows are strongly influenced by the country’s role as a transit route for people and commodities moving between Asia and Western Europe.

The most significant predicate-crime component of IFFs in North Macedonia is corruption and abuse of power, with government statistics suggesting that the number of such crimes is steadily increasing year on year.

Money channelled out of North Macedonia usually ends up in accounts in tax havens and secrecy jurisdictions with low taxes and no obligation to disclose the ownership of bank accounts. Bogodorica, Tabanovce and Skopje International Airport are the border crossings where the most incoming foreign currency has been seized.

Reports suggest that trade-based money laundering is particularly common. Local companies under-invoice export products and cash is smuggled across the border in return. Non-resident accounts, which are opened specifically for paying invoices, work similarly. Other money-laundering methods include life-insurance policies where instalments are paid in cash.

The gambling industry is a particular concern, especially after it was banned in Albania and Kosovo and companies relocated their operations to North Macedonia

The gambling industry is still a high-risk sector for money laundering in Kosovo, even though gambling was banned in 2019. A large number of former casinos and betting companies have been turned into coffee shops, restaurants and hotels where the gambling and money laundering continues. Money-laundering channels in Kosovo continue to be largely cash-based.

In Kosovo proceeds from corruption and abuse of power are believed to be the largest component of IFFs in the country.

Road construction is reportedly one of the sectors most susceptible to public-procurement corruption. Organised criminal groups are active in a wide array of money-generating activities, particularly drug trafficking and human smuggling. Migrants enter the country from both directions: from the south heading towards Serbia and the EU, and from the north to Albania and Italy.

Overall, the report says that evidence suggests that the scale of IFFs in the three countries is large, and that they are enabled by a number of structural features of the countries in the region: their integration, large informal economies, which represent 30%-40% of the economies in all three countries, as well as the overall weakness of the state institutions.

One of the conclusions of the report is that, although Albania, Kosovo and North Macedonia have a sound laws against anti money laundering and terrorism financing, many institutions lack the capacity to implement them.