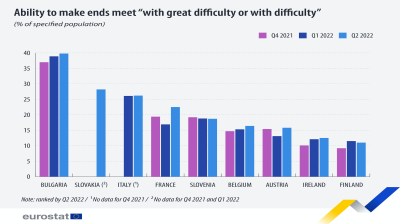 39.8% of Bulgarians are struggling to make ends meet, the highest share among ten European Union member states, a survey by the EU’s statistics agency Eurostat showed on November 28.

The survey was carried out in the second quarter of 2022 and included Austria, Belgium, Bulgaria, Finland, France, Ireland, Italy, Luxembourg, Slovakia and Slovenia.

The share of the population able to make ends meet with great difficulty or with difficulty increased over several quarters, Eurostat said. In the second quarter of 2022, it increased in comparison with the first quarter of the year in all participating countries, except for Slovenia and Finland, where it decreased by 0.1pp and 0.5pp respectively.

On the other hand, the highest increases in this share were registered in France (+5.6pp) and Austria (+2.7pp).

In Finland, the share of people having trouble making ends meet was the lowest, at 11%.

“Data show that more than one in five people had great difficulties or difficulties making ends meet in Bulgaria, Slovakia, Italy and France,” Eurostat said.

In the second quarter of 2022, most people in the ten EU countries participating in the quarterly data collection on living conditions reported increasing difficulties in making ends meet, compared with previous quarters, which was due to the surging inflation since the beginning of 2022.

The share of the population that could make ends meet easily or very easily ranged from 3.6% in Bulgaria to 40.5% in Finland. This share decreased in comparison to the previous quarter in nine countries, while it increased in Italy (by 0.3pp).

The highest decrease in the share of population that could make ends meet easily or very easily in the second quarter of 2022 compared with the previous quarter was registered in Slovenia (-4.4 pp) and Austria (-4.0 pp).