Afghans, Iranians in Tehran protest against Pakistani backing for a Taliban Afghanistan 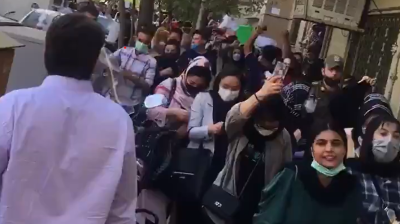 Protesters in Tehran expressed their anger at what they claim is Pakistan's involvement in securing unopposed Taliban rule in Afghanistan.
By bne IntelIiNews September 7, 2021

Hundreds of Afghans and Iranian supporters descended on the Pakistani Embassy in northern Tehran on September 7 to protest what they see as Islamabad’s support for the Taliban regime that is attempting to bring the whole of Afghanistan under its control.

Pakistan’s role in the formation of a Taliban-led government has been vital in recent weeks. What’s more, some among the protesters pushed claims that Pakistan’s air force has been deployed in the Talib campaign to take over the last stronghold of resistance to Taliban rule, namely the Panjshir (Five Lions) Valley, where the National Resistance Front of Afghanistan (NRFA) is based. Pakistan’s intelligence chief Faiz Hameed this week spent three days in Kabul and met with de facto leader of the Taliban Mullah Abdul Ghani Baradar.

At around 11:00 Tehran time, people were seen descending on the Pakistani Embassy building led by women chanting “Death to Pakistan, Death to the Taliban and Death to the Enemy” to diplomatic staff seen standing on the balcony of the embassy’s third floor.

Police kept a close eye on the gathering, some of whom were holding banners and the tricolour Afghan flag, which the Taliban has rejected.

Some protesters held up pictures of previous regional governors of Afghanistan and banners directing slurs against the “Emirate”. The Taliban has renamed Afghanistan the Islamic Emirate of Afghanistan since they conquered almost all of the country including the capital Kabul at the end of August as the US and allied forces completed their withdrawal. Others held signs reading #SavePanjshir.

There are thought to be 3mn or more Afghans in Iran, with most undocumented.

There were echoes of the Tehran protests in Kabul, where hundreds of people appeared on main thoroughfares. Taliban forces shot warning shots into the air to intimidate and disperse the crowds. Some unverified video footage from Kabul showed women arguing with gun-toting Taliban troops.

The demonstrations come one day after Ahmad Massoud, the leader of the anti-Taliban fighters in Panjshir Valley, called for a "national uprising" by civilians against the fundamentalist militants.

Iran on September 6 protested that the Taliban’s attack on forces of the NRFA in Panjshir Valley must not be allowed to end in “fratricide”. Soldiers of the NRFA are typically ethnic Tajik, or from other Afghan Persian-speaking groups, with which Tehran has an affinity. Tajikistan, a northern neighbour of Afghanistan, is thought to be supportive of the NRFA.

“[The] Panjshir [crisis] has a political solution. Its blockade is by no means acceptable in terms of international and humanitarian law,” Iranian Foreign Ministry spokesman Saeed Khatibzadeh said on September 6.

Pakistan has dismissed the claims that its air force bombed resistance fighters in Panjshir, but Khatibzadeh said whether or not Islamabad was behind the ari raids was currently under examination in Tehran, adding that inter-Afghan talks were the only route to finding peace in the country.

September 7, meanwhile, brought some speculative and unverified reports by Indian media that the air force of an unidentified country bombed the Taliban in Panjshir under cover of darkness the previous night.

Later on September 7, the Taliban named an all-male caretaker government, including an interior minister wanted by the FBI.

The UN says 18mn people are facing a humanitarian disaster in Afghanistan, and that a further 18mn could quickly join them.