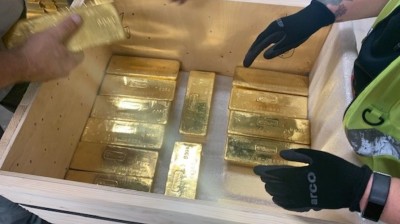 Gold bars being transported from the Bank of England to Narodowy Bank Polski.
By Nelly Tomchikova in Prague December 4, 2019

Slovakia’s former prime minister and leader of the ruling Smer party Robert Fico has called for Slovakia’s investment gold, stored in the Bank of England, to be brought home.

The proposal — which is not supported by Slovakia’s central bank — was made shortly after £4bn (€4.7bn) worth of gold bars, stored in the Bank of England since the Second World War, were flown to Warsaw.

The developments are part of a broader trend of governments seeking to repatriate their gold reserves.

Slovakia has around 31.7 tonnes of gold with a total value of about €1.3bn stored in the Bank of England, state news agency TASR reported.

According to Fico, 30 MPs will submit his proposal to parliament and ask the National Bank of Slovakia (NBS) to start preparations.

The former prime minister said at the end of November he was motivated by the possibility of a new financial crisis and instability in the UK as a result of Brexit, with Britain’s exit from the European Union still unclear.

In addition to Poland, four other Central European countries — Austria, Germany, Hungary and Romania — have already decided to withdraw their gold from the Bank of England, Fico said.

He claimed that, “I guarantee that if something happens, we won’t see a single gram of this gold.” “You can hardly trust even the closest allies after the Munich Agreement,” he told journalists, referring back to a 1938 agreement between the UK, France Italy and Germany, that made it possible for Adolf Hitler to annex part of Czechoslovakia.

He also pointed out that the rate of return is in the area of 0.2-0.4%, describing this as “nothing”.

The transfer of Poland’s gold back to Warsaw was carried out in a huge, closely guarded operation over several months that saw the airlift of 8,000 gold bars weighing around 100 tonnes in total.

G4S’s International Logistics division, which carried out the operation said the gold was initially counted, prepared and packaged at a purpose-built G4S gold storage facility in London, then loaded into high-tech armoured trucks.

“In the middle of the night, the trucks, escorted by police and helicopters, arrived at the London airport. The bars were then airlifted to two airports in Poland,” G4S said in a statement after the operation was completed.

On arrival in Poland, G4Si staff were greeted police officers who loaded the gold into three armoured vehicles, which were driven by a full motorcade to vaults in undisclosed locations.

Earlier this year, Romania’s Chamber of Deputies passed a bill stating that most of Romania’s gold reserve should be brought back home. The law was submitted by the centre-left Social Democratic Party (PSD) in power at the time, and was seen as part of the party’s nationalist rhetoric.

The state-owned Ukrgasbank bank signed off on a €30mn loan from the International Financial Corporation (IFC) on January 25, as part of the bank’s preparations for privatisation.

New government will be equally balanced between Reform and Centre, and by gender, and has many new faces.