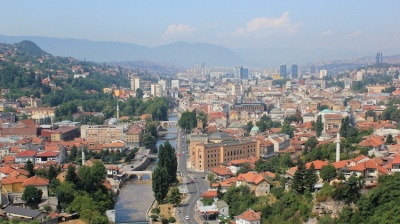 The Bosnian capital becomes a bustling tourist centre during the summer months when large groups of travellers from the Gulf arrive to escape their countries’ oppressive heat.
By Pierre le Jeune d'Allegeershecque of Alaco November 18, 2019

Late October in Sarajevo, and the Bosnian capital is a far cry from the bustling tourist centre it becomes during the summer months, when large groups of travellers from the Gulf arrive to escape their countries’ oppressive heat.

In fact, most of the tourists we came across were European, drawn to the city for other reasons — its recent history and (well-earned) reputation for providing cheap meals and nights out. Therein lies one of the challenges facing Sarajevo and Bosnia & Herzegovina as a whole: how can it maintain its appeal to both types of traveller, without losing parts of its character which make it such an attractive travel destination?

Still mainly associated by middle-aged Westerners as the site of a brutal four-year siege which decimated the city in the Bosnian war of the early to mid-nineties, Sarajevo, and Bosnia generally, have been enjoying something of a tourism revival in recent years.

Just a few months ago, Romesh Ranganathan, a British stand-up comedian, recorded a travel programme to try to “counter people’s pre-conceptions” of a country still reeling from the conflict. Most recently, a Bosnia-based low-cost airline opened a direct flight to London for the first time in years. While vestiges of the war abound in the city, its inexpensive, vibrant cultural and nightlife spaces remind the visitor of Prague or Budapest before they became in-demand destinations.

At the same time, Bosnia has been heavily marketed to Gulf tourists from the United Arab Emirates and Saudi Arabia, who traditionally summered in Turkey but have been warned off by ongoing political tensions between the countries.

Gulf companies are some of the largest investors in Bosnia and have, in an effort to appeal to the Gulf tourist market, taken steps to provide Sharia-compliant hotels, shopping centres and restaurants in Sarajevo and across the country. These spaces, where alcohol sales are prohibited, have been the target of significant criticism from conservative Western media outlets, which are keen to see in them further evidence of increasing hard-line Islamic influence in Europe.

Speaking to both Muslims and non-Muslims in Bosnia, however, a concern more readily brought up relates to the villa and luxury apartment developments which have been sprouting up across the country. These developments are marketed almost exclusively to Gulf tourists and would, in any case, be out of reach to all but the most well-off Bosnians. Once completed, local Bosnians have reportedly been prevented from entering some of the developments, which remain empty for the majority of the year.

There have also been concerns raised about the process by which these properties have been sold. Because foreigners cannot legally own property in Bosnia, the developments are often purchased through opaque companies, leading some commentators to suspect that local politicians might be profiting from rubber-stamping the projects.

Bosnia’s success as a tourist destination will depend on how well it manages a delicate balancing act. Too many visits by European partygoers will create an uncomfortable environment for Gulf visitors. Rising numbers of Middle Eastern tourists, on the other hand, could drive the spread of Sharia-compliant public spaces and put pressure on parts of Sarajevo’s vibrant network of bars and restaurants.

The reviews of a popular hotel in the capital recently featured a Belgian tourist, incredulous at the hotel’s restaurant and bar no longer serving alcohol after it was bought out by a Gulf-based investment group.

The balancing act will no doubt be challenging and, in many ways, echoes Bosnia’s wider complex political situation. The country should avoid mistakes made in the post-war era to address the often-competing interests of the country’s Bosniak, Croat and Serbian communities, which has at times led to political deadlock.

At the top of the iconic abandoned bobsled track from the 1984 winter Olympics, now made easily accessible by the modernised cable car that opened just over 18 months ago, a few intrepid tourists are looking for the perfect shot of Sarajevo, which stretches across the valley below.

That it is difficult to picture Serbian and Bosnian forces fighting on that very hillside is a testament to how far Bosnia has come since the war. For these gains in stability and prosperity to be cemented or furthered, it has to guard against political populism and extremism in Europe and elsewhere influencing its already fractional and volatile domestic politics.

Pierre le Jeune d'Allegeershecque is a senior analyst at Alaco. Alaco Dispatches is the business intelligence consultancy’s take on events and developments shaping the CIS region.