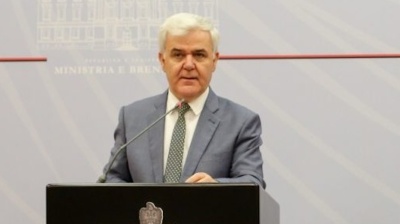 Albanian interior minister Fatmir Xhafaj resigned unexpectedly on October 27 following persistent accusations by the opposition parties that the government is doing nothing in the fight against crime, corruption and drug trafficking.

The exact reasons for his resignation were not given, but Xhafaj has been under pressure to step down since May, when the opposition accused him of covering up his brother’s alleged links to drug traffickers.

Xhafaj was appointed interior minister in August 2017 after his predecessor Saimir Tahiri was sacked — also due to alleged links with drug traffickers.

When he came to the post, Xhafaj said that the priorities of the ministry in the next four years will be the fight against drugs and organised crime.

Now Xhafaj says he submitted his resignation for his own reasons, underlying that the challenges in the ministry were huge.

“I came to the task for a difficult mission and served with passion, modesty and devotion to the state, the law and citizens,” minister was cited as saying by Albanian Daily News.

Socialist Prime Minister Edi Rama said in a tweet that he accepts the resignation.

“I accepted the resignation of minister Xhafaj and thanked him for the valuable contribution,” Rama said.

Following the resignation, Rama nominated former military official Sander Lleshi to replace Xhafaj. Rama said he believes Lleshi will bring “positive energy” to the ministry, according to the tweet. His position must be approved by the president and the parliament.

“The speed [of reform] has to be increased and more meaningful results have to be achieved,” Rama said after he named the new minister.

EU-aspiring Albania must implement tough justice reforms and take a firm fight against drug trafficking as part of its EU's membership bid. The country has made substantial progress in eradicating large-scale cannabis plantations including at Lazarat, the so-called "marijuana mountain". However, accusations of links with drug traffickers and organised continue to be levelled at top officials.

Earlier this year, the opposition Democratic Party (DP) claimed the minister's brother Agron Xhafaj was involved in drug trafficking and the leader of a criminal group in the southern city of Vlora. The party accused the minister of covering this up.

The DP published an intercepted phone call, which it said confirms that the minister’s brother is engaged in drug trafficking. Agron Xhafaj denied the accusation.

Rama said when the tape was released that the Democrats were sabotaging the country’s bid to obtain a date to launch EU accession talks, a decision which was made in June 2018.

Rama accused the party of revealing the video recording shortly before the EU-Western Balkan Summit in Sofia on May 17 with the aim of damaging Albania’s image.