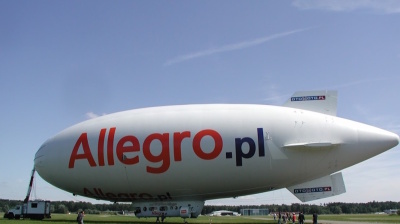 Allegro's PLN10.6bn IPO in October made a splash on the otherwise sleepy Warsaw bourse.
By Wojciech Kosc in Warsaw April 18, 2021

There’s a good chance that looking for a book long out of print, a Lego set or a brand new laptop, your search led you to Allegro, Poland’s top e-commerce platform.

Started in 1997 in a bid to emulate the success of Ebay, Allegro was simply an online flea market in the beginning, but under the growing role of the internet in people’s lives, the site quickly became a one-stop shop for things new and old.

Allegro proved so popular in time that its inspiration, Ebay, had to give up on entering the Polish market in the early 2000s because of a lack of interest from Polish shoppers.

But the site now faces its toughest challenge yet, with US e-shopping giant Amazon taking it on for the leadership of the Polish e-commerce market, with the launch of its own Polish language site.

The battle comes as the Polish e-shopping market is booming, boosted by the temporary closure of bricks and mortar shops during the coronavirus (COVID-19) pandemic. Sales in the e-shopping market reached some PLN83bn (€18.2bn) last year, an expansion of 36% versus 2019, according to a recent report by consultancy PwC. That was 14% of Poland’s entire retail sales last year.

Recognising the right moment to raise capital, Allegro’s owners targeted late 2020 for an IPO. The PLN10.6bn offering in October made a splash on the otherwise sleepy Warsaw bourse – it was a WSE record and one of the biggest IPOs in Europe last year. Allegro is now one of the Warsaw Stock Exchange’s biggest companies, with a market cap of around PLN58bn (€12.76bn) as of mid-April.

After the IPO, Allegro remains controlled by the private equity funds Cinven, Permira and Mid Europa Partners, which acquired Allegro for $3.25bn in 2016 from South African owner Naspers. The funds floated some 25% of the company on the WSE in mainly existing shares.

With an estimated 79% of Polish consumers using Allegro for shopping online, it came as no surprise that the company fared exceptionally well in the pandemic year. It posted a net profit of PLN261mn (€57.38mn) in the fourth quarter, a jump of 110% year on year.

Earnings before interest, taxes, depreciation and amortisation (ebitda) grew 35% y/y to PLN514mn. The jump in net profit came on the back of revenues rising 61% y/y to PLN1.3bn in October-December. The gross merchandise value – an indicator of the total value of merchandise sold on an e-commerce platform – expanded 58% y/y to PLN10.85bn in the fourth quarter.

Allegro expects to improve its GMV by nearly 20% in 2021 while forecasting growth of well over 20% in revenue. The company will at least double its capex to PLN560mn-PLN600mn this year.

The booming market and Allegro’s healthy figures have, however, attracted the attention of Amazon, which on March 3 launched its .pl domain store, making Poland's e-commerce scene much more competitive overnight.

Another eBay-like scenario is unlikely to play out this time around, as Amazon looks much more serious at cracking the Polish market.

The US online retail giant has been operating in Poland since 2014, and even before the launch of its Polish language website it employed 18,000 people in 10 logistics centres, located typically in smaller towns near big metropolitan areas like Poznan, Wroclaw or Lodz. The company is already the largest US-originating employer in Poland and the third-largest US investor in the country of 38mn.

The entry of Amazon alone is expected to boost the ratio of online shopping in overall retail to 20% from the current 14%.

In response, Allegro's shares have dipped over 32% in 2021 to date, with analysts arguing the company’s value is now getting more real after the arrival of Amazon.

“The materialisation of one of the biggest risks for the company, the entry of Amazon onto the Polish market, has been reflected in valuation hiccups since the beginning of the year,” analyst Tomasz Gessner wrote for Poland’s stock analytics website Stooq.

The fall in the share price was helped along in the short term by Allegro’s main shareholders’ decision to kick off an accelerated book-building process in mid-March with the aim of selling roughly 7.5% of the existing stock.

But it could help the stock in the longer term because it increased the free float to just above 30%, making it more attractive to foreign investors. The MSCI index is expected to soon announce an increase in Allegro's weighting to 0.35, from 0.25, creating potential passive inflows of $139mn as a result.

Nevertheless, the mid-March book-building surprised analysts, coming less than 180 days after the IPO. “It is difficult not to associate it with Amazon's recent official entry into the Polish market,” analyst Konrad Ksiezopolski from Haitong Bank told the stock exchange news website Parkiet.

“The competitive environment for Allegro is clearly tightening. In addition, Allegro is entering the segment of automated parcel lockers, which is going to turn it into a more capital-intensive business,” the analyst added.

To defend itself from Amazon, Allegro is moving into the parcel locker business, by reportedly setting up an initially small network of 1,500 machines countrywide.

This would bring it into direct competition with the market leader InPost, which operates over 11,000 lockers. All in all, the Polish e-commerce market looks like it is going to become a much tougher place to earn a healthy profit in the next few years.