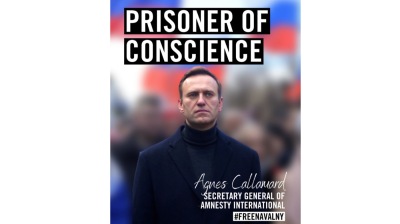 Amnesty International has decided to reverse its controversial decision to remove Navalny’s Prisoner of Conscience status and said it made a "mistake."
By Ben Aris in Berlin May 9, 2021

The widely respected organisation caused a storm when it revoked the status in February, demoting the outspoken Kremlin critic Navalny to a mere “political prisoner” because of right-wing comments he has made in the past.

“Following careful evaluation Amnesty International has decided to re-designate Alexei Navalny as a “Prisoner of Conscience”,” Amnesty said in a statement.  “In February, Amnesty took an internal decision to stop using the “Prisoner of Conscience” term for Navalny, due to concerns relating to discriminatory statements he made in 2007 and 2008 which may have constituted advocacy of hatred. The Russian government and its supporters used that internal decision, which we had not intended to make public, to further violate Navalny’s rights. That was the height of hypocrisy, coming from a government that not only attempted to kill Navalny by poisoning, but has carried out unconscionable acts over the past two decades, including torture, enforced disappearances and widespread repression of political freedoms in Russia and abroad, as well as war crimes in Syria.”

Navalny is a nationalist and came to prominence through his anti-corruption work, but his first public exposure was from producing right-wing political videos, where he likened illegal immigrants from the Caucasus to “cockroaches” and recommended crushing them with a slipper.

In subsequent interviews with the Western press after he had gained international recognition Navalny refused to recant or withdraw his earlier remarks. A core part of his support base are Russian nationalists, and when he ran in the Moscow mayoral elections part of his platform was to deport illegal immigrants back to their homelands. The message plays well with many voters, as Russia remains a conservative country and xenophobic racism against those with dark skins is widespread.

The human rights group embarrassed itself and drew widespread condemnation for its decision to downgrade Navalny shortly after he was incarcerated in January. With Russia’s opposition in disarray, Navalny has been one of the few prominent and effective voices calling the Kremlin to account by exposing corruption at the highest levels. His documentary claiming Russian President Vladimir Putin is the beneficiary owner of a luxurious mansion on the Black Sea, “Putin’s Palace”, has had more than 100mn views.

Amnesty’s decision may have also affected the EU decision to delay sanctions on Russia connected to Navalny and the US likewise was restrained in its sanctions connected to the case, only targeting those directly involved with the investigation and Navalny’s jailing.

"They (Amnesty) told me just yesterday that they will issue a press release on May 12 after they have examined how the Russian disinformation campaign managed to influence them," Navalny's chief of staff Leonid Volkov, speaking in English to Canadian legislators, told the House of Commons Foreign Affairs Committee. "They will not only reinstate his status but they will also issue a post-mortem," he said.

Amnesty said in its statement that it was reviewing the process for designating someone a Prisoner of Conscience.

“As a result of this episode, Amnesty has commenced a review of its overall approach to the use of the term ‘Prisoner of Conscience’. As an initial interim step, our approach has been refined [so as] not to exclude a person from designation as a Prisoner of Conscience solely based on their conduct in the past. We recognise that an individual’s opinions and behaviour may evolve over time. It is part of Amnesty’s mission to encourage people to positively embrace a human rights vision and to not suggest that they are forever trapped by their past conduct,” Amnesty said. “Moreover, when Amnesty International designates an individual as Prisoner of Conscience, this in no way involves or implies the endorsement of their views. Amnesty only concurs with opinions that are specifically consistent with the protection and promotion of human rights.”

As part of the scandal it appears that Amnesty’s decision was influenced by information fed to the organisation by pro-Russian interlocutors.

“Amnesty International made a wrong decision, which called our intentions and motives into question at a critical time, and apologises for the negative impacts this has had on Alexei Navalny personally, and the activists in Russia and around the world who tirelessly campaign for his freedom,” Amnesty concluded.

Turkey, China in firing line as Biden holds summit with Nato allies
7 hours ago
Hungary’s most powerful oligarch says he is just a lightning rod for attacks on Orban
1 day ago
US sanctions on Russia’s OFZ local debt come into force
1 day ago
Moscow back on lockdown as coronavirus infection rate surges again
1 day ago
Lukashenko pushing illegal Iraqi refugees over the border into Lithuania
1 day ago