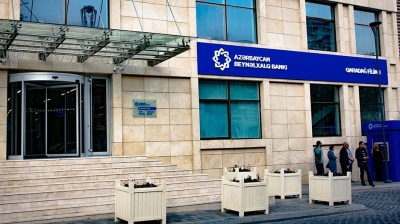 Free haircuts.
By Maximilian Hess in London for EurasiaNet March 19, 2021

If capital markets were spooked by wars and political unrest, the Caucasus would be terribly short of cash right now.

The past year has not been quiet in the region: Armenia and Azerbaijan engaged in their fiercest war in a generation, killing thousands. Protesters in all three capitals clashed violently with police, breaking into parliament buildings in Baku and Yerevan. And then there’s the pandemic.

Yet the tumult is belied by the relative stability of the region’s bond market. Even amid Georgia’s months-long election crisis, Tbilisi is calmly book-building to issue a new $500mn eurobond in the coming weeks. The debt will be used to refinance its current eurobond (a tradable loan issued abroad and denominated in hard currency) when it comes due for repayment on April 12.

Georgia has long been a darling of Western capital markets, and a major recipient of so-called official financing—that provided by foreign governments or international lenders like the World Bank.

Successive governments in Tbilisi have professed their devotion to free markets, but rating agencies cite Georgia’s access to foreign government-backed credit as the key factor in its ability to meet its financing needs.

Not without justification. Tbilisi first tapped eurobond markets in April 2008, just four months before it would lose a short and painful war with Russia.

As fighting began, the major credit ratings’ agencies immediately downgraded Georgia, prompting the bond to tumble 5% on the first day of the conflict. Tbilisi’s financial future was precarious, particularly as some of the funding had been targeted to develop Abkhazia and South Ossetia, territories even further beyond Tbilisi’s reach after the war. Then-finance minister Nika Gilauri told Eurasianet in December 2008 that some $130mn of the $500mn the bond raised had already been used on war-related expenses.

Though Georgia was quickly put back on solid footing with a $1bn injection from Washington and other emergency support from the IMF, access to international capital markets remains limited, constrained by the relatively small size of its economy. An effort by multilateral lenders to develop the local currency bond market has had some moderate successes, but external, foreign-currency funding remains crucial.

State-owned Georgian Railways followed the Georgian sovereign in issuing a $250mn eurobond in 2010, but then refinanced two years’ later with a 10-year $500mn note. The privately controlled Bank of Georgia beat both to the punch, issuing its first eurobond in 2007. These efforts too were supported by international financial institutions (IFIs), as was the 2018 eurobond debut of Georgia Capital, a diversified local investor led by Irakli Gilauri.

Gilauri, a former EBRD banker, once ran the Bank of Georgia. He is the brother of former prime minister Nika Gilauri (in office 2009-2012). The family is uniquely responsible for the country’s access to foreign capital markets, naturally attracting criticism from the other side of Georgia’s polarised political chasm.

Telecommunications firm Silknet and TBC Bank both debuted eurobonds in 2019, even as TBC’s founder was engaged in a political squabble with the head of the ruling Georgian Dream party, Bidzina Ivanishvili.

The pandemic has tempered the market a little, halting a planned eurobond issue in April 2020 by Georgia’s state Oil and Gas Corporation. In October, local investment bank Galt & Taggart warned that Georgian Railways, whose eurobond is due to mature in 2022, may struggle to “secure financing at favourable terms” after revenues fell at the start of the pandemic.

But if Armenia is any indicator, Georgian Railways should not face much trouble.

Armenia is fairly new to global capital markets, having debuted in 2013 with the sale of its $700mn so-called “Kardashian bond.” Tapping into the Armenian-American socialite’s brand was a bet on appealing to the sizable diaspora. Since reformist Nikol Pashinian came to power in 2018 his government has mulled diaspora bonds—debts sold at a discount to people with ties to the homeland—but this has not happened yet.

Yerevan issued only its fourth eurobond at the start of February 2021. The timing is far more remarkable than past marketing campaigns. It was issued just three months after Pashinian signed a humiliating ceasefire, surrendering much of Nagorno-Karabakh and surrounding Azerbaijani territory that Armenia had controlled for more than 25 years. Yet the 3.9% in annual interest Armenia has to pay is lower than the 4.2% pledged with its previous $500mn eurobond issuance in November 2019. In other words, investors were even more excited to invest in Armenia after it lost a war than they were before.

True, the effective yield—the amount an investor buying the debt on the secondary market can expect to receive at current prices—has increased in recent weeks as investors continue to have concerns about the country’s political future amid sustained efforts to oust Pashinian. The relatively low interest rate Armenia was able to secure in February is almost entirely due to the global low-rate environment supported by Western stimulus policies rather than Armenia’s political and economic fundamentals.

That Armenia was able to sell foreign-currency-denominated bonds so soon after the war, and amid such political unrest, is unprecedented. Renaissance Capital’s Charlie Robertson, an observer of emerging and frontier debt markets,

Amazing markets. #Armenia loses a war with Azerbaijan, but borrows $750m Eurobond this week (that's a third of its $2.2bn FX reserves) at 3.9% interest rate for ten years. Demand was high enough to be $250m above $500m initial plans. Its Ba3 / B+ rated, like Cote D'Ivoire https://t.co/vGKWlYVuIg

— Charlie Robertson (@RencapMan) January 27, 2021  the size of the bond—at $750mn it is one-third of Armenia’s foreign currency reserves—evidence of "amazing markets.”

The same demand is responsible for driving some key Azerbaijani eurobonds to all-time highs (the higher the trading price, the lower the yield). Baku’s debut sovereign eurobond, issued in 2014 and due to mature in March 2024 presently yields a paltry 1.6% as rising oil prices boost Baku’s economic outlook. Pricing is broadly similar for a note issued by the State Oil Company, SOCAR, due for repayment in 2023.

Yields on both Azerbaijani and Armenian bonds spiked during the height of their conflict last fall, but never reached the highs seen during the market panic when the pandemic began a year ago. The sell-off particularly affected debt linked to oil companies, and that month SOCAR debt hit a record high yield, at an annualised rate of 9%. While emerging country debt markets recovered rapidly, there was another sell-off in late April when oil prices went negative, a previously unimaginable scenario. 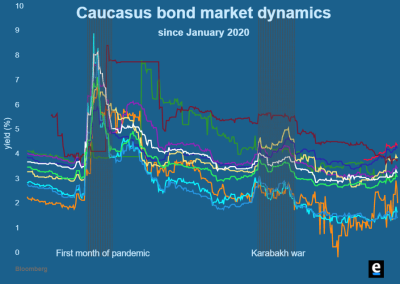 With oil prices now recovering, and Western central banks signalling they will keep interest rates near zero, Azerbaijan will continue to be welcomed in capital markets where memories are short.

Back in 2017, Baku defaulted on debt issued by the state-controlled (but not majority state-owned) International Bank of Azerbaijan (IBA), which the government had promised to honour—without legally binding guarantees. IBA subsequently went through a messy restructuring. Most investors elected to swap their claims for a new 15-year sovereign eurobond which did not include a nominal haircut, accepting duration risk instead, though junior debt holders were only offered 50 cents on the dollar. It was the largest default the South Caucasus has witnessed to date and it was ultimately revealed to have been caused by a tussle for position among Baku’s rarefied elite.

The opposite has happened.

Today, a global appetite for yield is enticing investors toward such risky frontier markets again. When they eye the Caucasus, the region’s political and security challenges do not seem to be dampening investors’ interest.

Maximilian Hess is a London-based political risk analyst and writer.

Unbundled: the Gas Transmission System Operator of Ukraine
5 hours ago
EXPLAINER: Just how bad are the sanctions on Russia’s ruble-denominated OFZ treasury bonds?
1 day ago
Uzbekistan's stock market sees its first big "pump & dump" incident
1 day ago
Allegro will have to move fast to stem the Amazon flood
1 day ago
Kyrgyzstan president prescribes poison root for COVID-19
3 days ago