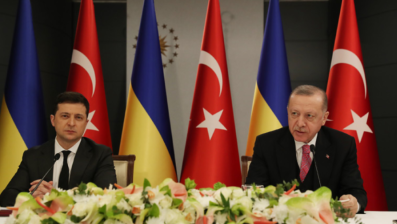 Zelenskiy, left, and Erdogan at a meeting in April last year in Istanbul.
By bne IntelIiNews March 6, 2022

The longer the conflict between Russia and Ukraine persists, the harder it will be for Turkey to continue on a “third path” that enables it to maintain ties with both Moscow and Kyiv. That’s the conclusion of some analysts including an associate professor at Brooklyn College.

“Against a backdrop of Russian bombs falling indiscriminately on civilians in Kharkhiv and Kyiv, Ukrainian and Russian delegations met for an initial round of ceasefire talks –and Turkey’s president, Recep Tayyip Erdogan, reiterated that Turkey could not cut off ties with either Russia or Ukraine,” wrote Louis Fishman, who analyses Israeli, Palestinian and Turkish affairs, in an analysis for Haaretz.

He added: “Since the war broke out, Erdogan has condemned the Russian aggression and voiced full support for Ukraine’s sovereignty, falling in line with NATO allies. However, Turkey has opted out of sanctioning Russia.

“That insistence on maintaining warm and equidistant ties with both Russia and Ukraine will soon come under perhaps impossible strain. But for now, if you thought this policy would outrage the defiant Ukrainian president, Volodymyr Zelensky, think again.

“Up to this point, Turkey has managed to maintain good relations with both countries. Erdogan even visited Kyiv just a day after Russia declared the Donbas and Luhansk regions as so-called ‘people’s republics’, a day before the Russian invasion, and he was welcomed by Zelensky with open arms. Turkey also has supplied Ukraine with Bayraktar surveillance and attack drones which are already in active use against the Russian army.”

Turkey’s relations with Russia and Ukraine will come under renewed focus on March 10, when the foreign ministers of the foes will meet in the southern Turkish resort city of Antalya for talks on how to resolve the war. 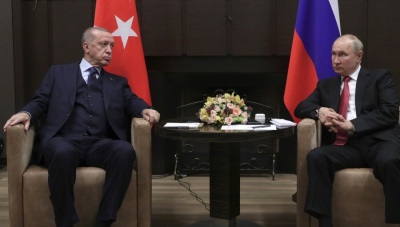 Erdogan and Putin at a summit in the Russian resort of Sochi on the Black Sea coast in September last year.
Erdogan, noted Fishman, has strategically balanced a determined stand alongside the Ukrainian people, while sustaining a working relationship with Russia.

For now, he said, “that balancing act has the implicit OK from the U.S.-European coalition against Putin’s war. Turkey is important for the coalition as an interlocutor with Russia, and at the same time, Turkey’s engagement in the crisis is the best chance to fix what have been severely strained relations between Turkey, the United States, and Europe.

“Turkey cannot in any case quickly dash the relations it has cultivated with Russia, especially taking into consideration the poor state of its economy.”

Dimitar Bechev, lecturer at the Oxford School of Global and Area Studies, who has spent much of his career studying Russia and Turkey, told Politico on March 5 that the Turkish position on Russia “has always been a balancing act”.

Ankara’s need to tread the line with Moscow is “not something that starts with this war,” Bechev, author of a new book entitled “Turkey Under Erdogan: How a Country Turned from Democracy and the West”, added, saying: “In the 1990s, there was a lot of concern about Russia and Turkey clashing in the post-Soviet space. But they sort of learn how to coexist and how to do business together.”

Bechev said he believed Turkey would continue to try and strike a balance in relations with the warring countries, while also aiming to play a greater geopolitical role. “It will try to be neutral, try to be the one in the middle of maximizing its own national interests,” Bechev said.

Last week, US Secretary of State Anthony Blinken praised his Turkish opposite number and thanked Turkey for its "strong support in defence of Ukraine and its sovereignty and territorial integrity”. On the same day, Republican Marco Rubio, who serves as vice-chair of the US Senate Intelligence Committee, praised the Turkish drones used by Ukraine.

“Turkey won more plaudits from Republicans and Democrats when it invoked the 1936 Montreux Convention that allows Ankara, in times of war, to block all warships from crossing the Dardanelles and the Bosphorus straits. Zelensky had flagged this ask in a tweet several days ago, and it is likely to have been on the agenda of their Kyiv meeting,” added Fishman in his analysis.

He also observed: “It may be that invoking the convention will end up affecting Russian warships’ mobility between the Black Sea and its naval facility on the Syrian coast, a potential strategic headache more than impacting the Ukraine crisis, where Russian warships are already in battle positions.

“Turkey can package this as a bold move which Russia is unlikely to challenge, as doing so would land not just Turkish-Russian relations in rough waters, but also that of the NATO alliance at large.

The harder it will be

But the longer the Russian and Ukrainian conflict persists, the harder it will be for Turkey to continue on the third path it has chosen. If Erdogan is successful at maintaining this fragile strategic balance, the economic pains of his current crisis at home will at least be alleviated, while paving his way back to the United States and EU, without playing too hard on his relations with Putin.”

There are signs, said Fishman, that Erdogan is prepared to “seriously test the elasticity of Putin’s patience”: on February 28, his UN ambassador Feridun Sinirlioglu declared Russia’s aggression on Ukraine as "baseless, unjust, and unprecedented in history", adding that it was "illegal, illicit and unacceptable". Balancing that, Erdogan’s spokesman stated the same day that Turkey would not be imposing sanctions on Russia in order to "keep a channel open" for dialogue.

“But,” concluded Fishman, “if Erdogan is gratified by the warmth already emanating out towards him from the halls of power in Washington and Brussels, he might find that the price for further rehabilitation is to roll back the measures he has pushed that threaten democracy and the rule of law.

“A cynic might say Erdogan’s strong support for Ukraine’s freedom is somewhat ironic when, at home, he treats his opposition and voices of dissent more like Putin than Zelensky.

“If a boost in Turkey’s global standing through its conduct on Ukraine could entice Erdogan into restoring relations more substantively with the West, it would necessarily have to include an end to his government’s widescale clampdowns on civil and political freedoms, and the jailing of those who dare voice dissent outside the narrow parameters his government deems acceptable. Without it, there is a glass ceiling on relations with the United States and the EU.

“The question Erdogan is juggling is whether loosening his near-authoritarian grasp on power in Turkey could save his political career – or end it. If he does not make the choice to change, the Turkish electorate might just make that choice for him in next year’s elections.”

Missiles or sabotage: What caused the explosion at the Russian airbase in Crimea?
1 day ago
Czech government remains colour blind on green issues
1 day ago
Poland ups the ante in feud with Brussels over judiciary reforms
2 days ago
What's the current outlook for Belarus' export sector?
3 days ago
Russian gas exports to Europe tumble in June
3 days ago