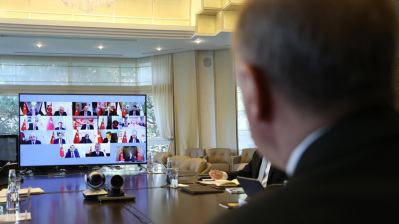 Erdogan addressing his cabinet via video conferencing on March 30.
By bne IntelIiNews March 30, 2020

With the Turkish lira continuing to feel the heat—it lost another 2% on March 30 to trade at 6.58 to the dollar, taking its losses in the year to date to around 10%—analysts are questioning whether the Erdogan administration will approach the US Fed to arrange an FX swap facility.

Some observers have suggested that Turkey could be heading towards a ‘lira crisis part II’, following the summer 2018 currency crisis that pushed the country into recession. Timothy Ash at BlueBay Asset Management remarked in a note to investors on March 30:  “There seems to be no end in sight for the lira which continues to weaken—lots of market focus on dwindling FX reserves.

“Wonder when the Turks will finally put in a call to the Fed for an FX swap facility. That will come with strings attached—read sending the S400s [Russian missile defence systems purchased by Turkey that Washington does not want Ankara to activate] packing.” 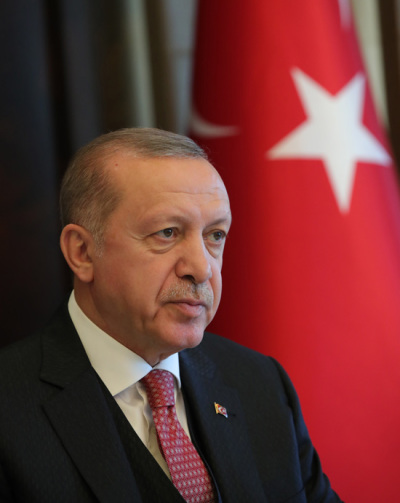 Erdogan, seen during a cabinet meeting conducted by video-conferencing on March 30, has called on Turks to "keep the wheels turning".

Turkish President Recep Tayyip Erdogan’s strategy of credit-fuelling Turkey to a fast rebound from recession-ailed 2019 was already seen as on shaky ground before the coronavirus pandemic and the economic storm it has brought with it hit. Officials, who have determined that Turkey will not be going to the IMF to ask for funding, will now have to strain every sinew to stand a chance of keeping the plan somewhere on track. The yield on Turkey’s benchmark 10-year bond rose to 13.50% on March 30 from 13.08% at the end of last week.

With analysts concerned that Turkey could end up having a worse COVID-19 outbreak than neighbouring Iran (seventh worst-impacted in the world), Turkey (12th worst-impacted to date) is further turning on the credit taps, with the state-owned lenders expected to take the lead. The authorities have doubled the allotment for the Credit Guarantee Fund (CGF), via which companies access borrowing with the government acting as a guarantor.

The allotment has been raised to Turkish lira (TRY) 500bn ($77bn) for businesses and individuals, according to a presidential decree published in the Official Gazette on March 30. The new regulation was followed by a joint statement from the three government-held banks. It outlined how emergency loans would be extended to families with a monthly income of TRY5,000 liras or less.

Bloomberg said the move may help the poorest 20% of the country who earn the equivalent of 6% of the country’s gross domestic product, according to government data for 2018. That compares with 48% for the top 20%. Around 40% of Turkey’s labour force earns a minimum wage of around $350 per month.

Turkey by the end of March 30 had officially recorded 10,827 COVID-19 infections with 168 related deaths (up 37 on the day), but the veracity of the data is widely doubted.

Hundreds of thousands of businesses have had to shut down amid the pandemic, while the wretched impact of COVID-19 shutdowns on the millions of Turks with unregistered work in the informal economy can only be guessed at.

There have been calls for a complete lockdown of the country of 82mn, with the main opposition urging the introduction of a stay-at-home order. That has not yet made it on to the government agenda, but on March 30 it was announced that 39 residential areas in 18 cities have been placed under quarantine to contain the coronavirus spread. Quarantines are underway in one town, six neighbourhoods, 28 villages and four hamlets, the interior ministry said. Turkey has also now halted inter-city trains and limited domestic flights. International flights were already subject to a blanket ban.

Reuters reported Erdogan had launched a campaign to collect donations from citizens for those in need, saying he was donating seven months of his salary to the cause and that the effort had already drawn $11mn.

The decree on the CGF allows credit under the programme to be restructured more than once, but sets a maximum maturity of 96 months for businesses and individuals, and 156 months for
investment loans.

It also doubled the amount the Treasury and Finance Ministry can contribute to the programme to TRY50bn.

Turkiye Kalkinma ve Yatirim Bankasi (TKB), the Turkish development bank reconfigured recently to provide long-term investment loans, has been included under the programme along with other lenders.

Under the CGF mechanism, commercial banks share some of their lending risks with the Treasury. It covers 7% of any losses. That’s sufficient for banks to approve many clients with borderline creditworthiness.