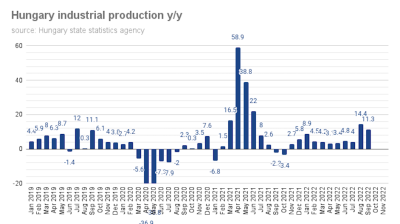 Hungary’s industry kicked off Q3 with a modest performance, posting a 3.5% decline m/m in October, the first contraction in five months and the first since the pandemic. Output grew by 5.9% (chart) y/y and by 5.1% when adjusted to workdays, the Central Statistical Office (KSH) said in a preliminary reading on December 7.

The output of the automotive industry and the computer, electronics and optical equipment sectors showed "significant" growth, KSH said, while the increase in output of the food, drinks and tobacco products segment fell slightly.

Hungary’s industry bounced back dynamically after the pandemic as supply disruptions eased and it weathered the energy crisis and the war relatively well. Industrial exports remained stable as the slowdown on external markets has been moderate and the impact of rising energy prices had little impact so far on production, but that can change, analysts said.

Despite the downturn in October, we remain optimistic about the longer-term outlook for the industry as industrial order books were 21% higher than a year earlier, ING Bank analyst Peter Virovacz commented. Barring supply shocks, the sector could be the engine of economic growth in 2023, or more accurately, probably the only meaningful positive contributor, he added.

Capacity expansion in the manufacturing sector gives ground for optimism for the sector’s short-term outlook.

Hungary has to avoid recession and maintain the stability of its industrial businesses, Minister of Economic Development Marton Nagy commented, adding that the sector is in an increasingly difficult situation due to high energy and raw material prices and a deteriorating financing and interest environment.

The government launched measures to support energy-intensive companies and raised the subsidided credit Szechenyi Card scheme and extended a freeze on lending rates to SMEs, he noted.

Under the "factory rescue programme", companies could apply for HUF150bn (€365mn) to support energy-efficiency-improving investments. Hungary must keep investments going, boost advanced technologies and high value-added developments and improve energy efficiency and sustainability in order to maintain the sector's good performance, he added.