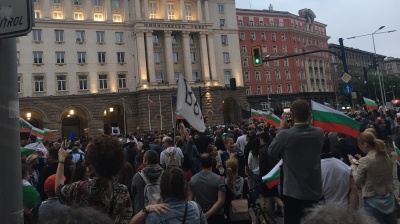 Tens of thousands of people in Bulgaria’s capital Sofia and several other major cities flooded onto the streets on July 12 – the fourth day of anti-corruption protests — demanding the resignation of the government and chief prosecutor Ivan Geshev and expressing the pent-up anger of the people after years of apathy.

To defend democracy is the motto of the protests, sparked by a raid on the offices of President Rumen Radev and the arrest of two of his advisors on unproven accusations of influence peddling. This was seen as attempt by Geshev to put pressure on Radev, who is a loud critic of the government of Boyko Borissov.

Some of the placards at the Sofia protest read: “How long shall we stand Borissov’s lies” or “Mutri [mafia] out!”, “It is so bad that even introverts are here” and, more cryptically, “Pumpkin, you fall at 200 [km/h]” — in Bulgaria “pumpkin” indicates someone as stupid as if he has a pumpkin on his shoulders instead of a head and refers to Borissov in this case.

Bulgaria’s three biggest cities after Sofia – Burgas, Varna and Plovdiv – also joined with rallies and many see in these protests a renewed energy from the rallies in the summer of 2013.

“The protest is not political. People want the mafia out of the management of the state and to live in a normal, democratic country. And they are tens of thousands,” Miglena, a teacher and mother of two, said.

Georgi, 33, said he does not support any of the opposition parties and he is not out to defend Radev, but to oust all corrupt politicians.

“I will not stop protesting against all corrupt politicians even if they are from the party I support as a voter. This is my civil right, even more – my obligation,” he said.

Backed by the president

Radev gave his support to the thousands of people who gathered spontaneously on July 9 to demand the resignation of the government and the chief prosecutor, accusing them of being completely dependent on the “mutri”.

“The Bulgarian mafia achieved the impossible — to unite honest people against itself,” the president said on July 9.

Radev has long been critical of Borissov and his government. Many saw the raid on the presidential offices as an attempt to silence Radev the day after he insisted on an investigation into state security services employees who were sent to guard the villa of controversial politician Ahmed Dogan.

Although on July 11 Radev stopped going out to talk to people, he addressed the nation, saying the only exit from the current crisis is resignation of Borissov and Geshev and urging them not to wait for tensions to escalate more.

Meanwhile, supporters of opposition Democratic Bulgaria staged a gathering on the beach outside Dogan’s villa on July 11, after Hristo Ivanov, the leader of Da Bulgaria, one of the parties in the Democratic Bulgaria coalition, was turned away from the beach by state security forces, even though it is supposed to be public land. Dogan — despite being considered one of Bulgaria’s most influential politicians — does not hold an official position that entitles him to state security.

This comes on top of the series of corruption scandals involving members of Borissov’s government — from suspiciously low-priced luxury apartments acquired by high-ranking officials, to illegal waste imports, to leaked gangster-style photographs taken in the prime minister’s bedroom.

However, Borissov said in a video address from his home on July 11 he will not resign, because the opposition would “break the country”. Once again he repeated that his government has done a lot, claiming he has built more highways than anyone else and taking the credit for the fact that the country was just accepted into the Exchange Rate Mechanism. Borissov also claimed he was a democrat and would not call on his supporters to use force. Borissov accused Radev of provoking tensions and clashes with the police.

The leader of the opposition Bulgarian Socialist Party (BSP) Kornelia Ninova also sparked criticism when she said her party will use the protests and file a no-confidence vote against Borissov. Protesters responded angrily, saying the party must not try to use the protests for its own benefit.

After flooding the streets for months, in 2013 Bulgarians forced the then government of the BSP to resign and the early election was won by Borissov in 2014. Widespread corruption and never-ending political scandals under Borissov’s last two governments have led to apathy and lack of energy for protests in the past several years. Now this is beginning to change.