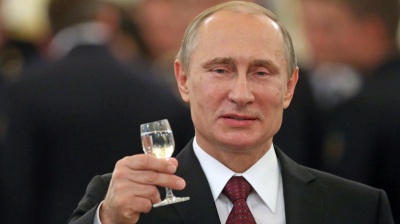 The approval rating of Russian President Vladimir Putin ticked up to 64% in September as the country emerges from the coronacrisis.
By bne IntelliNews October 1, 2021

In September Russian President Vladimir Putin's personal approval rating remained in the same band as it has in recent years, improving slightly from 61% to 64%, according to independent pollster the Levada Center.

The 61% Putin garnered in August was the lowest rating he suffered since his approval rating fell briefly to 53% at the start of the coronavirus (COVID-19) pandemic last April, but he was back to 64% by the start of this year as the economy emerged from the crisis.

Prime Minister Mikhail Mishustin's approval rating also improved from 53% in August to 55% in September, which is slightly down from his recent high of 60% last August, when the population considered he did a relatively good job in dealing with the pandemic.

The approval rating for the government was more or less flat at 49%, giving it a thumbs up and 48% a thumbs down, and hasn't changed much in the last year. The Duma, however, remains deeply unpopular, scoring only 40% approval in September, with another 56% disapproving and 4% undecided. The Duma’s approval rating clashes sharply with the landslide victory for the ruling United Russia Party, which took 315 seats, or 50%, in September’s general election, which was marred by widespread and blatant rigging.

The governors’ approval rating was steady at 58% approval vs 38% disapproval, up by 1pp from a month earlier. However, governors were briefly polling on a par with Putin at the start of 2020 but have lost ground in the last year and half, as they were in the front line dealing with the pandemic and most didn't deal very well with it. Their current rating is down from the high of 67% approval in January 2020, only one point behind Putin in that same month.

The poll also found that those that said they believed there would be protests with political demands fell 1pp from 28% in May to 27% in August, but interestingly the share that said they would participate in those protests if they happened rose 3pp from 16% to 19% in the same period.

Likewise, the number that said they thought there would be protests with economic demands fell 4pp to 26% from 30% between May and August, but, again, the number of respondents that said they would participate if the protests happened also rose from 21% to 24% in the same period.

These results are interpreted by pundits as saying that the population is increasingly dissatisfied with the government’s performance but thanks to the extreme crackdown that has been put in place since the start of the year in the run-up to the Duma elections in September few are prepared to put their head above the parapet, despite being more disgruntled than ever.