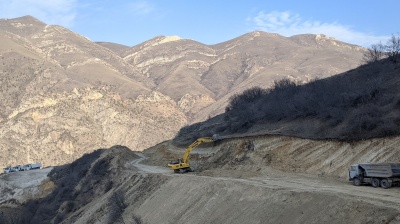 There are few regions in which the importance of international connectivity, or the lack thereof, is on starker display than the Caucasus. Three decades ago, the region went from an integrated province to an isolated backwater nearly overnight. The collapse of the USSR, and the wars that followed, left an erratic set of Soviet-drawn borders interspersed with war-torn separatist enclaves to create a new geography of chaos.

Nowhere was this breakdown felt more than Armenia. As a result of its own war in Karabakh, the newly independent state found itself with 80% of its borders closed, a near-death knell for a landlocked country. That only increased the importance of those few outlets that remained: the border with Georgia in the north, and the distant outlet to Iran in the south.

It is that latter lifeline that has come under threat in recent months, part of the new reality faced by Armenia in the wake of its defeat by Azerbaijan in last year’s Second Karabakh War.

On a stony hillside outside the village of Ltsen, in southern Armenia’s Syunik Province, a group of excavators and lorries rend the terrain. Just ahead of them, the remainder of the road they are improving is visible – little more than a dirt track, seldom used even by locals.

“This road will go all the way to Tatev and the monastery there,” says Derenik Hovhannisyan, the Ltsen village head. “They’ve done about seven kilometres already. When it’s finished in the spring, even cargo trucks will be able to use it,” he says.

Hovhannisyan is one of perhaps a hundred residents of Ltsen, an otherwise unremarkable settlement that is now set to lie astride one of several new major north-south highways under construction in southern Armenia.

“This road will lead to Tatev village, where it will intersect with the larger road there,” says Hovhannisyan, sketching out a crude map of several of the new arteries. “From Ltsen, it’ll connect onwards to Sisian or the main road north of here – it’s not clear how yet,” he adds.

These new projects have taken on crucial significance in the past few months.

Following last year’s war, the parts of Azerbaijan bordering southeast Armenia returned to Baku’s control for the first time since 1993. Among these gains were several stretches of land where the highway between Goris and Kapan – the main north-south roadway in Armenia, leading from the Iranian border to the capital Yerevan and beyond – passed into Azerbaijani territory. While Armenia remained able to use this road for a time, Azerbaijan eventually decided to erect customs points along the stretches it controlled, effectively closing it to Armenian traffic and severing the country’s primary north-south highway.

As a result, the state found itself scrambling to improve alternative roads, or construct them from scratch. The Ltsen-Tatev road is one of at least seven bypass roads currently under construction.

At the road’s terminus, at the village of Tatev, reconstruction of the current north-south alternative has already finished, bringing hope to locals but not alleviating the problems caused by recent closures.

“We are very happy with this new road,” says Donara Badalyan, a Tatev local, speaking of the Tatev-Kapan road that was recently repaved with commercial-grade asphalt following the Goris-Kapan road’s shuttering. “Before, it used to take two hours to get from here to Kapan. Now it’s just 40 minutes,” she says.

The upgraded road snakes its way across formidable terrain, with hairpins climbing a half kilometre in elevation just before reaching Tatev. The very nature of the terrain makes it unsuitable for heavy cargo trucks, something that is already becoming clear.

“There are many crashes on this road now with the [commercial] trucks using it, one or two every day,” says Ruzana Aleksanyan, another Tatev villager who sells dried fruits at the famous nearby monastery. “The road is too narrow for these large vehicles. It will be even more dangerous in the snow – winter here is terrible,” Aleksanyan adds.

The Tatev-Kapan road is not meant as a permanent industrial artery, but a stopover while the main alternative is built. Connecting the far south town of Kajaran with the city of Sisian, about 10 km to Ltsen’s northwest, the planned new highway will be a mammoth project, involving blasting some 8 km of tunnels at a cost of nearly $1bn, and is still years away.

“They won’t announce the tender [for the Kajaran-Sisian road’s construction] until next year,” says Hovhannisyan, the Ltsen village head.

But the project’s completion is even further on the horizon.

“The [Kajaran-Sisian] road won’t be finished until at least 2026,” Hovhannisyan reveals. “It will take a very long time.” In the intervening years, Armenian imports coming from Iran seem sure to suffer.

With last year’s war having exposed how dependent Armenia was on the now lost north-south road, many in the country have asked why the state is only now getting round to building a workable alternative.

The answer, as with so many aspects of Armenia’s recent past, lies in rampant corruption.

The current infrastructure projects are just the latest incarnation of what began as the ‘North-South Road Programme,’ an initiative begun under previous president Serzh Sargsyan in 2008. The plan was to construct a 556km-long set of highways reaching from the country’s border with Georgia all the way to Iran, including a four-lane highway in its main section.

But the project never got off the ground. Of the $1bn raised for the project in its early years, most of it was siphoned away by federal and local officials. By 2015, the only work that had occurred was on the easiest (i.e. non-mountainous) segments with no sections completed, leading one newspaper to deem it a ‘corruption heaven.’ An investigation by Factor TV earlier this year found dozens of individual corruption schemes by companies and officials contracted to build specific sections of the road, totalling hundreds of millions of dollars. By 2017, just two years from the project’s announced deadline, a mere 6% of the work required had been completed.

The abject failure of this earlier highway project is just another of the poisoned chalices inherited by Prime Minister Nikol Pashinyan after the 2018 ‘Velvet Revolution’.

Amidst the stark reality of trying to play catch-up while under constant Azeri military pressure, the current roads under construction still represent something of immeasurable importance to southern Armenia’s local villages: hope.

For 40-year-old Abgar Margaryan, one of the most ambitious residents of Ltsen, the new road past the village represents salvation.

Margaryan currently has a team of locals working on a major guest house project in the village’s centre, erecting concrete slabs and drilling away on a mostly completed central building.

“We started this project two years ago, and I think the house itself will be finished next year,” says Margaryan, speaking via video link from Finland, where he works for half the year in international shipping.

Born in Yerevan himself, Margaryan’s grandfather was from Ltsen, and in the early 1990s his father relocated the family back to their ancestral village before passing away just a few years later.

“My father moved back to the village to keep it strong, at a time when villages were emptying,” says Margaryan. “He had the beginnings of this [guest house] project in his mind then, but only now am I finally able to make it a reality,” he says.

The new guest house already employs about 20 people, and once auxiliary facilities are completed – which Margaryan plans to include a horse farm, shooting range and recycling plant – the hope is to employ over 100.

A strong sense of patriotism – and of the need to develop Armenia’s rural areas and not just the glitz of central Yerevan – drives Margaryan.

“For me, Ltsen is the symbol of Armenia,” Margaryan says. “These villages are the heart of the country, and improving them is how we make Armenia strong.”

Hovhannisyan, the village head, approves of Margaryan’s plan, having borne witness to Ltsen’s decline himself.

“When I was a kid, there were about 500 people in Ltsen,” says Hovhannisyan. “Now, there’s a little over 100. There isn’t even a shop in the village anymore – it was unprofitable and had to close down. This road, and this guest house, are our hope to revive [Ltsen],” he says.