Armenian PM calls into question basis of talks with Azerbaijan 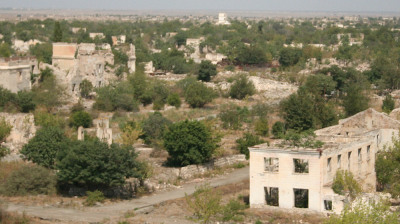 Agdam, an abandoned ghost town in Nagorno-Karabakh. The population of tens of thousands fled eastwards during the Nagorno-Karabakh War.
By Joshua Kucera for Eurasianet January 28, 2020

Armenian Prime Minister Nikol Pashinian has again roiled the peace talks with Azerbaijan, by publicly raising doubts about the current framework of negotiations.

In the middle of a five-hour press conference on January 25, Pashinian issued a lengthy broadside against one of his bêtes noires: the opposition press loyal to the former ruling regime.

Pashinian complained that a narrative has emerged in that media that he has “squandered the legacy” of his predecessor, Serzh Sargsyan, on ensuring Nagorno-Karabakh’s security and development.

Pashinian went on to lay out in some detail what he described as that legacy, and his explanation amounted to a fairly accurate, detailed description of the “Madrid Principles.” That is the current negotiating framework under which discussions, brokered by the Minsk Group of the OSCE, have been going on for more than a decade. The talks aim to bring to an end the conflict that has now lasted more than three decades over Nagorno-Karabakh, a territory internationally recognized as part of Azerbaijan but which has been controlled by Armenian forces since the two sides signed a ceasefire in 1994.

Pashinian, though, went in to quite a bit more detail than that. Just a small sample: “A vote has to be conducted to determine final legal status of Karabakh, the vote will be an expression of the will of the entire population of Nagorno-Karabakh under the auspices of the UN or OSCE, within the timeframe agreed by the parties, which will be legally binding and will comply with the norms and principles of international law…”

It was a relatively rare public discussion of the terms of the discussions that for the most part go on only behind closed doors between the leaders and diplomats of the two countries. And on the one hand, this could be seen as a step toward bringing the public in to an otherwise top-down process.

“If this is sustained and deepened, we might get to the point where real conversations are possible about the peace process,” said Laurence Broers, a longtime scholar of the conflict and Caucasus program director at the peacebuilding NGO Conciliation Resources, in an email interview with Eurasianet.

Pashinian also appeared to preview deeper negotiations to come, saying that “we must work together to approach a more specific, more substantiated discussion phase." Broers said that phrase was “suggestive of a possible alignment with Azerbaijan’s frequently made call for ‘substantive’ or ‘structured negotiations.’ It could be taken as preparing the ground for a more serious approach to the talks than the last decade’s, and of inviting Azerbaijan to define what substantive talks means in practice.”

But what got more attention was Pashinian's effectively equating the Madrid Principles with “Sargsyan’s legacy.” Sargsyan was the deeply hated, long-time ruler of Armenia until Pashinian led street protests in spring 2018 forcing him to step down, and Pashinian has been systematically dismantling his legacy since then.

Pashinian went still further in an effort to discredit the principles, calling on the candidates for de facto presidency of Karabakh – elections are scheduled for April – to weigh in on them.

Several candidates did immediately weigh in over the weekend: Ashot Ghulyan, Masis Mailyan, and Arayik Harutyunyan all issued statements in response to Pashinian's call and all criticised the principles.

The results were unsurprising, as the Madrid Principles – in particular the provision calling for the return of the Armenian-occupied territories to be returned to Azerbaijan – are broadly unpopular among Armenians. But even as certain tenets of them have become politically toxic, such a wholesale rejection of the framework has not been previously voiced among Armenia’s political elite.

Given Pashinian’s fixation on his domestic political enemies, and that was the context in which his statements were made, it’s not clear that the international implications of his explanation were at the top of his mind. But they do jibe with a number of other relatively hardline statements that Pashinian and his team have made and which have dashed initial hopes in Baku for a potential breakthrough in talks after Pashinian’s rise to power.

A rejection of the Madrid Principles would lead the negotiations into uncharted territory, as they are a bit like the old saying about democracy – the worst system except for all the alternatives.

“The ideas contained within the Madrid Principles remain the standard when it comes to practical ideas,” Broers said. “However unpopular the Principles’ ‘brand’ may have become under Serzh Sargsyan, there is no alternative set of ideas out there to replace them (nor forums that could generate such alternatives).”

Pashinian’s comments will no doubt be part of the conversation when the foreign ministers of Armenia and Azerbaijan meet in Geneva on January 29 and 30, their first meeting since September.

There was no official reaction to the comments from Baku – unusual when an Armenian official says something controversial – but some pro-government press did pick up on it.

“Pashinian shouldn’t speak any more about negotiations,” wrote Haqqin, a site associated with Azerbaijan’s security services. “The negotiations should be considered finished for Azerbaijan, as well. After all, if the return of territories is off the table, then why is Azerbaijan wasting time on this pointless process?”

Some auto sales growth seen at the start of March may be the last recorded for quite some time.

Analyst warns, meanwhile, that Turkish banks are more vulnerable in pandemic emergency than they were in 2018 lira crisis.

Small "Sun, Sea, and Sand" island destinations to be the worst affected by slowdown in global tourism flows this year, followed by Central and Eastern Europe, rating agency says.

Donald Trump said on April 2 that Russia and Saudi Arabia would be cutting their output, instead of continuing with a supply war that could result in hundreds of oil companies going out of business. The Kremlin denied his claim.