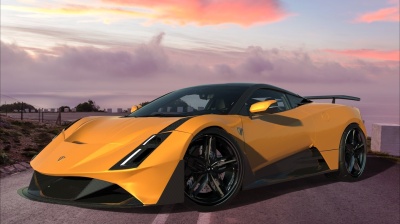 “Pure Sport is designed by the same designer who designed the Porsche 9RE fan rendering, Qendrim Thaqi. Now, through his company Arrera Automobili, Thaqi wants to make the Pure Sport the first Albanian Supercar,” Arrera Automobili said in a Facebook post.

28-year-old Thaqi was born in Kosovo and now lives in Germany. He has worked on rendering before, and designed his idea for a successor to the Porsche 918 Spyder in the past.

In an interview with the automotive portal Motor1, Thaqi revealed that he has already assembled a team of engineers and body designers.

The new supercar Illyrian Pure Sport will be powered by a 6.2-litre twin-turbocharged LT2 V8, with a 840 horsepower going to all four wheels via an eight-speed Tremec dual-clutch automatic, the company said.

Arrera Automobili follows another startup from the region, Croatia’s Rimac Automobile, a manufacturer of electric hypercars that has attracted the attention of luxury sports car producers that are looking to adapt to the industry’s electric future.

VIENNEAST COMPASS: All in? Kosovo, Albania and the prospects of unification