Assassination of Soleimani: What if Iran’s real plan of revenge is to turf Trump out of office? 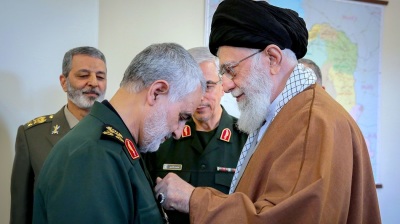 Soleimani last year received Iran's highest military honour, the Order of Zolfaghar, from Supreme Leader Ali Khamenei. He became the first person to receive it since the 1979 Islamic Revolution. It was established in 1856 as the Decoration of the Commander of the Faithful.
By Will Conroy in Prague January 8, 2020

To those surprised that Iran chose to respond to the US assassination of its second most powerful official with modest attacks on two Iraq air bases used by the Americans—so carefully calibrated that they turned out to be casualty-free—there is a big question that should chip away: What if Tehran’s calculation is that the best revenge for the death of Qasem Soleimani would be to use bloody proxy attacks and other tactics in the Middle East in the months running up to Donald Trump’s re-election bid in November to tie the US president in knots and help ensure he is kicked out of the Oval Office?

Provoking a full-on confrontation with a superpower fairly bristling with state of the art weaponry is almost certainly not in Tehran’s interests—not that it would necessarily be a cakewalk for the American military—but doing all it can to ensure Trump doesn’t get a second term as president absolutely is. Indeed, if Trump is returned to the White House by US voters, and stays embroiled in his bitter standoff with the Iranians, a war between America and Iran might soon become an inevitability if the commander-in-chief feels sufficiently off the leash.

Two well-known Iran analysts were among observers taking up these themes on January 8, a day that ended with what might have been another tactical attack by Iran—Reuters was reporting that at least one of two Katyusha rockets fired into Baghdad’s Green Zone fell just 100 metres away from the US embassy.

Sanam Vakil, an Iran specialist at Chatham House, told The Independent: “They [Iran] are trying to regularly message the various constituencies and political groups in the United States for their own purposes.

“They’re messaging not just to the current administration but obviously to the Democratic candidates. They’re trying to assess US politics as they plan their next steps and look at the year.”

Mahdi Khalil, a political analyst in Tehran, remarked: “There’s a perception in Iran that the Democrats and perhaps other western countries are working to make sure Trump is not re-elected. If he’s re-elected there will definitely be a war.”

Assassination of military leader of a sovereign nation

Iran showed great restraint in limiting its initial retaliatory move to the conservative missile strikes on the military bases. But Trump, after all, has assassinated the military leader of a sovereign nation on the soil of another sovereign nation (and there was no consultation over the move with the Iraqis). The Iranians almost certainly have more in store. Whatever the truth is about the level of involvement Soleimani had with “terrorists” and pro-Iran militia that took the lives of hundreds of US soldiers in Iraq as he masterminded Iran’s diplomatic and military moves in Middle East conflict zones—and nobody seriously claims that he didn’t get blood on his hands amid the labyrinthine and clandestine world of hostilities in the region—Trump went beyond the pale in casually taking him out with a remote-control Reaper drone attack at an airport, ordered from his holiday residence in Florida.

Portraits of Soleimani are being carried aloft in rallies from Tehran to Gaza to Yemen. The charismatic major-general, 62 when he died, who rose from his origins as a farm boy has become a “living martyr” and icon of the Shi’ite anti-American resistance. Adding to the keenly felt indignance is that his big role in halting the rampage of the Islamic State terror across Iraq and Syria, sometimes even co-ordinating with the US, is rarely acknowledged in the West.

“The shock factor isn’t so much that Soleimani has died—he was after all in many battles—but the way the US president has taken ownership of this will create that type of zeal and drive and commitment across the Middle East,” Ellie Geranmayeh, from the European Council on Foreign Relations, told AFP.

The so-called Iranian “axis of resistance”, stretching from Iran to the Mediterranean Sea, will now be “galvanised to focus more on their ultimate goal, which is the US withdrawal from as much of the Middle East as possible,” she added.

"Blood of the martyrs"

Remarking on Soleimani’s role defending Shi’ite Muslims from Sunni Muslim aggression, a Huthi official in Sanaa, the Yemeni capital held by the Iran-backed militia, told the news agency: “The blood of the martyrs... is not just Iranian or Iraqi but belongs to the Muslim community and to free men around the world.”

At a mourning ceremony in the Gaza Strip Soleimani was eulogised by the militant Palestinian movement Islamic Jihad.

The general has even been hailed as the “Che Guevara of the Middle East” in some quarters.

“They’re packaging Soleimani as this foreign policy guru, martyr, strategist... away from the narrative that he was a terrorist and responsible for loss of life,” added Vakil.

Iran’s supreme leader, Ali Khamenei, has described the missile strikes on the bases as “a slap in the face” for the US. But he also warned that Tehran still had a wider goal of expelling its enemy from the region. He told an audience in the city of Qom on January 8: “We just gave [the US] a slap in the face last night. But that is not equivalent to what they did.”

Interesting to watch will be the expected subservience British PM Boris Johnson shows to Trump as he keeps one eye on the US trade deal he is desperate for to steady the UK as it leaves the EU. He is choosing his words carefully. “Clearly the strict issue of legality is not for the UK to determine since it was not our operation,” said Johnson in the UK parliament on January 8 when challenged over whether the assassination breached international law.

He also raised the accusation that Soleimani had supplied “improvised explosive devices to terrorists, which I’m afraid killed and maimed British troops”. Johnson added: “That man had the blood of British troops on his hands.”

Clearly scathing of the UK as a US lapdog, Iran's defence minister Amir Hatami responded to a UK statement on the killing of Soleimani by observing: "Some countries unfortunately because of the situation they are having after WW2 they are having and following a policy of brown nosing."

If a Democrat is elected US president in November it will be interesting to observe Johnson changing his foreign policy tune.

Perhaps nostalgic for the pre-Trump era when the American president played by some semblance of the established rules, Democrat hopeful Joe Biden in New York City on January 7 criticised the “haphazard decision” to kill Soleimani, calling Trump “dangerously incompetent” and a man who provides “tweets… tantrums… evasive answers”.

“If there was an imminent threat that required this extraordinary action, we’re owed an explanation—and facts to back it up,” he said.

If Trump gets his second term such worthy remarks will just have to remain quaint for the foreseeable future.

How a dispute over language reflects cultural and political divisions in a country squeezed between Russia and Western Europe.

ALACO DISPATCHES: I say Moldovan, you say Romanian…
19 hours ago
ING: Russian budget spending plays catch up in January
5 days ago
TRACE: A closer look at corruption risk in the western Balkans
12 days ago
ING: Poland's growth slows sharply and the outlook is poor
23 days ago
ASH: Putin moves from "Fortress Russia" to "Go for Growth"
24 days ago