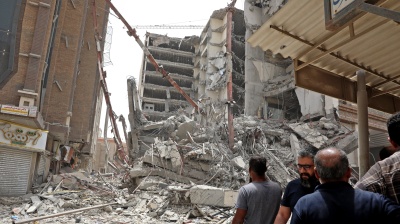 Iranians protest in Abadan over the collapse of the building that left several dead. / CC: IRNA
By bne IntelIiNews May 23, 2022

A building on May 23 collapsed in oil-rich city Abadan in southwest Iran, causing at least five deaths and possibly leaving more than 100 people trapped under the rubble, IRIB reported.

Part of the Metropol building on Amiri Street in Amiri District came down after the lunch hour. Recent weeks had brought several complaints of shoddy construction work from a local journalist.

Angry locals descended on the the municipality responsible for the building. City mayor Mohammad Amirpour was beaten by several men on the streets, according to video footage released on social media.

Other video footage released showed people chanting against local officials and the Islamic Republic's central government. There were some unverified recordings of people scrambling to get bloodied survivors out of the building.

Posts on local messaging boards said up to 100 people were believed to be missing at the site of the collapsed building. Other posts said anti-riot police were seen entering the city to put down any anti-regime protests.

“Instead of rescue workers, nurses, ambulances and blood [for transfusion], the government is sending special units and riot police. To whom should we tell of this pain,” one person wrote in an online forum in Persian.

The collapse is a reminder of a major infrastructure failure in the country back in 2017, when the historic Plasco building in central Tehran caught fire due to faulty wiring and ultimately collapsed, killing over a dozen firefighters and some tenants of the commercial block.

Tug of war emerging over what role Iran (and its oil) should play in new world order
Death of China-to-Russia cargo transit routes means it’s all aboard for Kazakhstan
bneGREEN: Iran records one of the hottest days on Earth ever