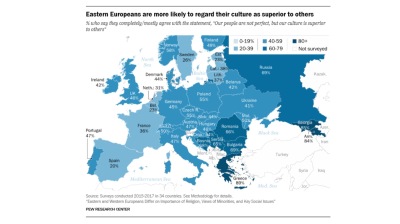 Cultural chauvinism is strong in most countries in emerging Europe
By Ben Aris in Berlin November 1, 2018

Nearly a quarter of a century after the fall of the Soviet Union and the end of the communist experiment, most of emerging Europe has yet to embrace the liberal values of Western Europe, found a survey by the Pew Research Centre released on October 30.

“The Iron Curtain that once divided Europe may be long gone, but the continent today is split by stark differences in public attitudes toward religion, minorities and social issues such as gay marriage and legal abortion. Compared with Western Europeans, fewer Central and Eastern Europeans would welcome Muslims or Jews into their families or neighbourhoods, extend the right of marriage to gay or lesbian couples or broaden the definition of national identity to include people born outside their country,” Pew said in its report, the result of surveys conducted by the research centre between 2015 and 2017 among nearly 56,000 adults (aged 18 and older) in 34 Western, Central and Eastern European countries

Despite the relatively multicultural make up of the eastern block that is home to hundreds of nationalities and major religious minority groups, Eastern Europe remains a nationalistic, xenophobic, homophobic and in some cases outright racist place. The liberal values that are inculcated in the populations of Western Europe have still had too little time to become part of the political DNA of these countries.

The first finding is that families in emerging Europe say they are resistant to accepting a Muslim into their family by marriage. For most of the Warsaw pact countries, which are predominately Orthodox Christian, on average only 30% of respondents said they would accept a Muslim as a family member. 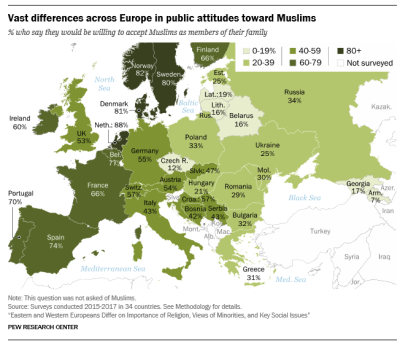 From the other significant countries in the region Russia (34%, 40%) and Poland (33%, 57%) stand out as amongst the most tolerant, whereas Ukraine (25%, 43%) has failed to adopt the EU values it says it aspires to. The biggest surprise is probably that Czechia (12%, 51%), Lithuania (16%, 41%) and Latvia (19%, 53%) are amongst the most intolerant of Muslims in particular in the entire region, despite having wholeheartedly thrown themselves into the EU family.

Religion was effectively banned by the former system, but today it has become an integral part of national identity and has been used by the governments in the region for political ends. In Russia the anti-corruption blogger and opposition activist Alexei Navalny can get at best a few thousand protestors onto the street, however, a saint’s relics displayed in Moscow will draw crowds that run into the hundreds of thousands. 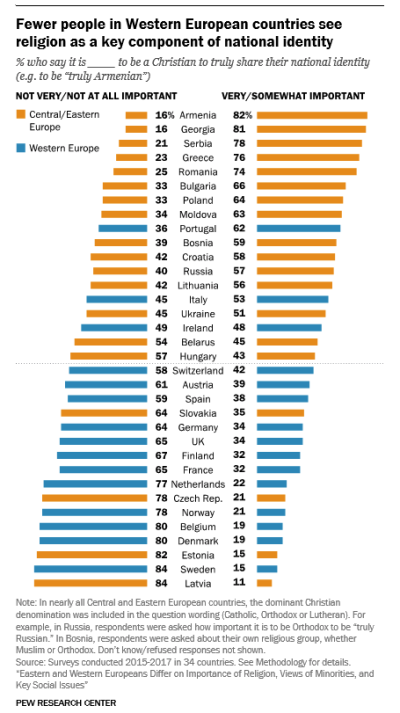 The situation is precisely the reverse in the west where religion plays little role in shaping the ideas of national identity.

Cultural chauvinism also plays a much bigger role in the east than in the west. As the map shows almost all the countries in the Warsaw pact countries believe their cultures are superior, with the trend being especially strong in Russia and the Balkans. 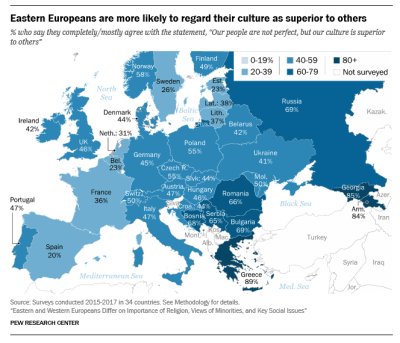 Same-sex marriage is probably the most divisive issue in emerging Europe. Events like images from the annual St Christopher Street Gay Pride parade in Berlin often feature in anti-western right-wing propaganda where the west is portrayed as decadent and immoral. Attempts to hold gay pride marches in places like Ukraine and Georgia need a heavy police presence and often end in violence. Russia has yet to hold a gay pride march, as these are routinely blocked by the authorities.

Most surprisingly is that young people in CEE are more conservative than their older peers in western Europe. “For example, 61% of younger Estonians (ages 18 to 34) oppose legal gay marriage in their country, compared with 75% of those 35 and older. By this measure, young Estonian adults are still six times as likely as older adults in Denmark (10%) to oppose same-sex marriage. This pattern holds across the region; young adults in nearly every Central and Eastern European country are much more conservative on this issue compared with both younger and older Western Europeans,” found Pew.

This is also true of young people’s attitude to mixed religion marriage: when it comes to views about Muslims and Jews, young adults in most countries in Central and Eastern Europe are no more accepting than their elders.

CAPITAL ECONOMICS: CEE growth comes off the boil in 2019, but loose money and strong demand will bolster growth in 2020

The tectonic plates holding together Azerbaijan’s clanocracy are shifting. Economists say a massive restructuring of the economy is needed to benefit ordinary citizens.

Russian President Vladimir Putin called for changes to the constitution that would shift power to the Duma, the Russian parliament, as well as imposing some new limits to the president’s power, during his annual state of the nation speech.