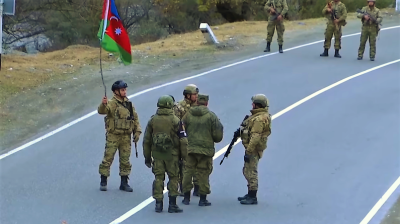 Russian peacekeepers and Azerbaijani military personnel seen near Vank village in Nagorno-Karabakh's Kalbajar District, handed over to Baku as part of the peace settlement.
By bne IntelIiNews December 4, 2020

Azerbaijan said on December 3 that it lost nearly 2,800 soldiers in the 44-day Nagorno-Karabakh war with Armenia that concluded in early November.

It was the first time that Baku had disclosed its military casualties. Defence ministry officials gave a precise death toll of 2,783, adding that more than 100 soldiers were still missing. Another 1,245 were being treated in medical facilities. Work was under way to identify around 100 dead servicemen by DNA analysis.

Armenia’s health ministry said on December 2 in an update that at least 2,718 Armenian servicemen were killed in the fighting.

Both sides have also said that scores of their civilians were killed in the conflict, accusing each other of indiscriminate shelling, including with cluster munitions.

The hostilities ended on November 10 with a Russia-brokered peace deal. It saw Azerbaijan retain control of territories it regained during the conflict, while Armenian forces were permitted to keep control of parts of the enclave that ethnic Armenians have controlled for more than a quarter-century, despite international law stating that all of the territory is part of Azerbaijan.

Russia has deployed nearly 2,000 peacekeepers for a period of at least five years to monitor the ceasefire deal and facilitate the return of refugees. Turkey is to send personnel to a monitoring centre it will run with Russia that will use observation drones to help ensure the truce endures. Ankara said this week the centre is under construction. It is expected that it will be located on Azerbaijani territory.

Azerbaijan celebrated the end of the fighting as a national triumph. President Ilham Aliyev declared on December 3 that November 8 will be celebrated nationally in future as Victory Day to mark the takeover of Shusha, a key city in Nagorno-Karabakh with cultural and religious significance for both Azerbaijan and Armenia, by Azerbaijani forces.

Aliyev earlier set the holiday for November 10, but he reconsidered because Turkey, which is Azerbaijan’s main ally, celebrates Ataturk Memorial Day on that date.

Pressure on Pashinian to quit rises

Separately, opposition groups in Armenia have this week stepped up their campaign to force Prime Minister Nikol Pashinian to quit over his handling of the Nagorno-Karabakh conflict by naming a single candidate they want to head a transitional government until a new general election can be held.

The move was announced by 17 opposition parties on December 3. The nominee for acting PM is 74-year-old Vazgen Manukian, a former Soviet era prime minister and ex-defence minister. He would, said the parties, head a “transitional, anti-crisis government”.

Pashinian is feeling increasing heat from many Armenians who are angry that he agreed to the Russian-brokered ceasefire that left Azerbaijani forces in possession of swathes of the breakaway mountainous territory and surrounding territories previously occupied by ethnic Armenians.

In their statement, the 17 opposition parties announced that they had set up a “pan-Armenian, nonpartisan” movement. It would, they added, feature “representatives of political parties, the intelligentsia, and the general public”.

One objective, they said, was “getting rid of the catastrophic regime of Armenia in a constitutional way, creating a transitional, anti-crisis government, which will prevent the loss of Armenian statehood, [and] carry out postwar recovery".

The evening of December 3 saw hundreds of people blocking streets in the capital, Yerevan, shouting slogans such as “Nikol, leave!”

Pashinian has steadfastly refused to resign. He has contended that the country’s armed forces advised him that the military situation in Nagorno-Karabakh had become hopeless for Armenia and that resisting the Azerbaijani offensive any longer would only result in more military and civilian casualties and the loss of the enclave in its entirety. The peace deal, which is yet to be negotiated to the point where the final status of Nagorno-Karabakh is settled, gives ethnic Armenians the right to maintain control of parts of the self-proclaimed republic, even though the whole of the territory is internationally recognised as part of Azerbaijan.

Also on December 3, Hetq reported Armenian Minister of Labour and Social Affairs Mesrop Arakelyan as saying that an estimated 80,000 residents of Nagorno-Karabakh were now living in Armenia having been displaced by the war.

Arakelyan said the government was aiming to get as many of these people back to the enclave as possible. He added that the state was paying each displaced citizen who could not presently return to their home—because it was either destroyed in the war or was located in an area now under Azerbaijani control—300,000 Armenian dram ($588).

The minister added that several thousand Armenian servicemen were still undergoing medical treatment as a consequence of the conflict.

The planned Turkish-Russian joint monitoring centre that will join the effort to keep the peace in line with the ceasefire that in early November ended the six-week Nagorno-Karabakh war is to be ... more

Iran apparently inadvertently insulted Azerbaijani Foreign Minister Jeyhun Bayramov on December 9 with a creased flag as he visited Tehran. The faux-pas was not the first of its kind made by ... more

Internet connectivity has become a problem for the parts of the Nagorno-Karabakh enclave still held by ethnic Armenians because the main internet line running from Vardenis to Stepanakert passes ... more