BALKAN BLOG: Anyone for COVID? 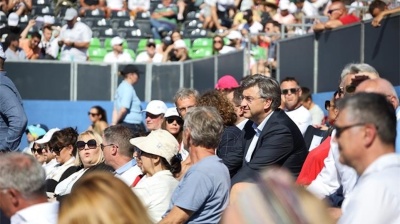 It was welcomed as the return of competitive tennis in a region that had successfully suppressed the coronavirus (COVID-19), and a test case for future international championships. But the Adria Tour charity tennis tournament that was to take place across four destinations in three Western Balkan countries ended in disaster as several players tested positive for the virus in the second leg of the tournament in Croatia’s Zadar, and both the Zadar finale and future matches in Banja Luka and Sarajevo were called off.

The tournament was organised by Serbian tennis champion and current world no 1 player Novak Djokovic, who has come in for a lot of criticism both over the organisation of the event — Djokovic and other players were filmed partying shirtless in a Belgrade nightclub at the start of the tour with no apparent social distancing, and games in Zadar were played to packed stands — but also because after fellow players tested positive he declined a test in Croatia and instead flew back to Belgrade.

Djokovic and his coach, former Wimbledon champion Goran Ivanisevic, were among the players to test positive, along with Bulgaria’s Grigor Dimitrov and Borna Coric from Croatia. Croatian Prime Minister Andrej Plenkovic, who met players in Zadar and was also photographed watching from packed stands, tested negative.

However, the prime minister has come in for a lot of flack from rival politicians ahead of the July 5 general election as the Adria Tour debacle coincided with a sharp increase in the number of new cases in Croatia, a country that had previously managed to virtually eliminate the virus with daily new cases down to zero or single figures. Several opposition politicians challenged Plenkovic’s decision not to self-isolate. The prime minister’s response was that he had only spent “about three minutes” with Djokovic which, he claimed, does not count as close contact whatever “quack doctors” may think.

Until now, Plenkovic had been viewed positively over his handling of the coronacrisis. After becoming the first state from the Central and Southeast Europe region to confirm a case of the virus in late February, Croatia managed to keep the total under 2,300 until the last few days, by introducing a strict lockdown. His government also rolled out several economic stimulus packages including specific measures to support hard-hit sectors such as tourism. Even an earthquake in the capital Zagreb failed to derail the management of the crisis. Along with other countries from the region such as neighbouring Slovenia, Croatia was seen as handling the pandemic much better than major West European countries.

This has helped Plenkovic’s poll standing, allowing his conservative Croatian Democratic Union (HDZ) to edge ahead of the rival Social Democrats, with the prime minister clearly benefiting from his handling of the crisis.

The successful containment of the virus — until now — enabled Zagreb to start opening up the economy again, allow tourism to resume, and schedule the general election originally planned for the spring.

No doubt the HDZ hoped to benefit from the poll boost from its successful handling of the pandemic, while getting returned to office before the crippling impact of this year’s events on the economy became apparent. With its large tourism sector, Croatia’s economy is forecast to be one of the worst hit — if not the worst hit — by the coronacrisis in the emerging Europe region.

Ruling politicians in other countries have already made the same calculation. In neighbouring Serbia, the ruling Serbian Progressive Party (SNS) was returned to office with an increased majority, as approval for President Aleksandar Vucic’s work during the crisis soared. In Mongolia, which only has a handful of imported cases despite bordering both China and Russia, the Mongolian People’s Party won another landslide in the election to the State Great Khural. Poland’s ruling Law and Justice (PiS) tried to rush through a postal vote only presidential election in May in a bid to get Andrzej Duda re-elected before the economic impact of the pandemic came down on the country, but scrapped it at the last minute. The election will now take place on June 28, but Duda is no longer a shoo-in for reelection.

Unfortunately for the ruling party in Croatia too, where the parliament was dismissed on May 18 to make way for the July 5 election, the number of new cases has been growing in the country lately, reaching a high of 95 on June 25. Opposition leaders are pressing for the vote to be postponed, and SDP leader Davor Bernardic said outright that the ruling HDZ had sought to benefit from the coronacrisis. Unfortunately for the ruling party, the election is now going to take place just as a new wave of infections has raised the spectre of a return to some of the restrictions imposed earlier this year. 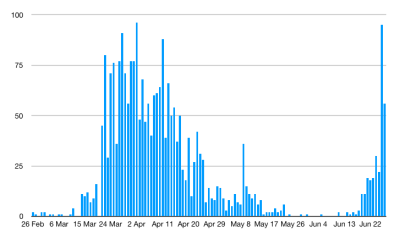 BALKAN BLOG: The controversial recipe for building up Albania