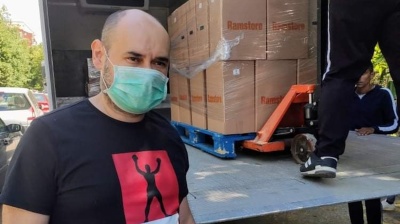 Barber Ali Fevzi distributes food and hygiene products to around 20 families in Skopje every day.
By Valentina Dimitrievska in Skopje June 2, 2020

The humanitarian mission of a barber from Skopje, Ali Fevzi, is a rare positive story during the coronavirus (COVID-19) crisis in North Macedonia.

Fevzi works in a barber shop in the Skopje neighbourhood of Cair, but due to the coronavirus lockdown measures, the salon was closed and Fevzi embarked on a humanitarian mission bringing food to socially disadvantaged families.

Every morning at 6am, Fevzi leaves his home, buys food and hygiene products with his own money, gets in his jeep and distributes them to about 20 families across the city no matter to which nationality or religion they belong. Sometimes he provides cooked meals to families. He travels about 60 km each day.

Even before the crisis, Fevzi helped people through the Facebook page ‘Give, Do Not Throw’ which has over 43,000 followers, collecting old TVs, furniture and clothes from people who don't need them, and donating them to low-income families.

Fevzi worked in Vienna for 10 years, from 2009 to 2019, and then continued to work in his father's barber shop in Skopje. But due to an unfortunate incident six years ago when a gas cylinder exploded in a building, he was in a coma for 10 days in a Skopje toxicology hospital. After he recovered from his coma, Ali decided to dedicate his life to helping others.

Ali has been married for 17 years but has no children, so his priority is to help kids and single mothers.

He is now receiving enormous support and praise on social networks for his humanitarian work. The aid is welcome to many citizens as due to the pandemic many people lost their jobs temporarily or permanently. Those who earn money from the informal economy are particularly affected.

Not easy to get state aid

The government announced financial recovery packages, but for many it is difficult to qualify for the aid. The conditions are strict and in practice only those who are totally helpless can get any help.

50-year-old Biba from Skopje spends her summers working in Greece and lives on that money and her small income from working for a polling agency and selling cosmetics in North Macedonia for the rest of the year. But now the activities in which she is involved have stalled since mid-March due to the crisis, it difficult for her to survive.

She complains that although the government has promised MKD7,000 (€113) aid to people in the shadow economy, who have been left without any income, it is difficult to get the aid.

To qualify, Biba must live alone, have no assets and receive no cash, even small amounts, in her bank account to qualify for the two-month social benefit during the crisis.

Since she lives with her parents and her father receives a modest pension of €230 a month and she owns an old car that has not been registered for years, she cannot qualify for the government assistance.

So the question is, how poor does one have to be to get the state help?

Even before the crisis, there were many complaints about the harsh conditions of the social services, which required recipients of modest social assistance of about MKD4,000 to return the funds if the tax authorities detected a small inflow of money into recipients’ bank accounts.

Many people are afraid to even apply for social benefits, fearing that one day the social services will ask them to return the money they received.

The government has so far announced three aid packages to support the economy and families affected by the coronavirus crisis.

On May 17, the third set of measures worth €355mn was adopted as direct assistance to citizens and businesses to offset the consequences of the pandemic.

The first two packages of economic measures were primarily aimed at saving jobs at risk due to the lockdown and helping companies mainly in the most affected sectors, such as transport and tourism.

One of the main measures in the third package is issuing payment cards of MKD9,000 for the benefit of 119,000 jobless people. The government will allocate €16mn for this measure.

But these cards can only be obtained by people who are active in the labour market and they can only spend the money in July to buy domestic products and services.

85,000 unemployed people who are not looking for a job actively are excluded from the measure. Biba, who expected to benefit from this measure, is among them.

“This is humiliating,” she commented.

The government will also issue cards of MKD3,000 for employees with income lower than MKD15,000.

Broadcaster Telma recently published a list of companies that have received financial assistance from the state to enable them to pay April salaries of MKD14,500 as part of the second package to deal with the consequences of COVID-19.

German car part company Kromberg and Schubert located in the southern city of Bitola with €1.19mn and Gentherm in Prilep with €422,000 received the most money from the state aid for payment of salaries.

About €106,000 went to metal company Brako, managed by former deputy prime minister Koco Angjushev, who is back in business after deciding to leave politics several months ago.

Also on the list of companies that received large portions of the financial aid is the private Acibadem Sistina hospital co-owned by high-profile businessman Orce Kamcev, which received €142,000. Kamcev is close to the opposition VMRO-DPMNE party, and is involved in a corruption scandal.

Many betting shops and casinos that have been closed since March received aid of over €100,000.

So far, financial assistance of over €28mn has been approved for over 21,500 companies, benefitting about 126,000 employees.

But this is also a great burden for the government when budget revenues from sources such as restaurants, factories and other businesses are reduced due to the lockdown. In April alone the revenues dropped over 20% from a year earlier and the budget deficit jumped almost fivefold to MKD4.7bn.

In order to provide money, the government issued a €700mn Eurobond, and borrowed money from the IMF, the World Bank and the EU, which is also expected to increase the public debt.

The budget was revised recently and the deficit was set to 6.8% this year instead of 2.3% as originally planned.

As all countries, North Macedonia’s economy will be severely affected by the crisis. The country is expected to see the largest decline in the economy in the second quarter and for the whole year the decline is expected to amount to about 3.5%.

The most disturbing thing is that when in many parts of the world and particularly in the region life is almost back to normal, North Macedonia is struggling with a large increase of new coronavirus cases which climbed by 89 on a daily basis on June 1, and by 67 on June 2, mostly due to citizens’ failure to respect the protective measures.

Unfortunately, the fight with coronavirus has not stopped in North Macedonia, so it seems the country needs more people like Ali Fevzi to bring smiles to the faces of people who are struggling to survive the economic consequences.