BALKAN BLOG: Montenegro braces for verdicts in "Trial of the century" 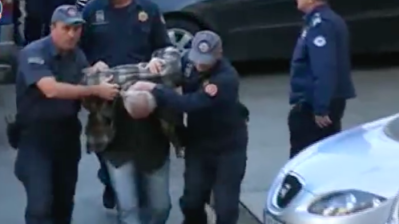 Numerous arrests were made as Montenegrin police thwarted a planned coup on the eve of the October 2016 general election.
By Denitsa Koseva in Sofia May 8, 2019

The two-and-half-year coup plot trial dubbed "The trial of the century" that has gripped the Montenegrin nation is nearing its end. The first instance of the higher court in Podgorica is due to announce the sentences for all those found guilty of involvement in the failed plot on May 9.

Prosecutors say the plot was intended to help the pro-Russian opposition Democratic Front (DF) to seize power in Montenegro on the night of the October 2016 general election and either imprison or assassinate the country’s prime minister (now president) Milo Djukanovic, with the help of Russian security services members and Serbian paramilitaries.

The DF, Montenegro’s main opposition party, is bracing for jail sentences for two of its leaders, Andrija Mandic and Milan Knezevic, and preparing to defend them from the police, raising fears of a possible escalation in tensions or violent standoff after the sentences are announced.

The party is known for its aggressive rhetoric and it has been involved in numerous clashes during protests and parliament sessions.

As May 9 approaches, the party is organising its supporters across the country to stay alert and be ready to defend Mandic and Knezevic should the police be instructed to arrest them after the sentences are announced.

The DF does not plan to stage an organised protest on May 9 and has not revealed details from its alleged plan how it will respond to verdicts, but local media have reported that, according to unofficial information, it has asked its supporters to gather at the party’s offices in the country and be prepared to occupy parliament to prevent the arrest of the two leaders.

It already anticipates a guilty verdict, writing on Facebook that it expects its leaders to be sentenced, accusing the court of being under the complete control of Djukanovic and claiming that its members will resist the alleged injustice. Although not directly saying anything about violence, the post suggests possible clashes.

Prime Minister Dusko Markovic has sought to dispel fears of violence after the verdicts are announced, saying there are no indications of possible violence on May 9 and that the police have not been put on alert ahead of the trial’s conclusion, broadcaster RTCG reported. Local analysts also speculate that just like in the past, the party would rather not provoke serious clashes and will just make a lot of noise.

The DF has occupied parliament several times to protect its leaders — who have been involved in several violent incidents in recent years — from the police. Usually, the party members stay in parliament for a few days but eventually give up and allow the arrests to take place.

Despite that, the police have provided an escort to prosecutor Sasa Cadenovic and the judge for the case, Suzana Mugosa. The chief special prosecutor Milivoje Katnic also has a police escort as required by law due to his rank.

Russians, Serbs and Montenegrins on trial

The trial began back in September 2017 after the special prosecution investigated the plot for several months.

Two Russians – Vladimir Popov and Eduard Sirokov – are accused of organising the plot. Sirokov was also accused of “preparing acts against the constitutional order and security of Montenegro through incitement” and terrorism. According to media reports, Sirokov and Popov are members of the Russian security services, GRU.

20 Serbian paramilitaries, led by former Serbian police commander Bratislav Dikic who testified on September 6, were arrested on the night of October 15 on suspicion of planning to disrupt the general election the next day. Most of them agreed to testify in exchange for shorter jail sentences.

The court is expected to find the two Russians, as well as Mandic and Knezevic and a few others guilty of plotting the coup. The two politicians were stripped of their parliamentary immunity in February 2017.

However, as the key witness of the prosecution, Sasa Sindjelic, has retracted his testimony and said in March that the suspects behind the alleged attempt to overthrow the government did not plan a coup and only wanted to rally in support of the opposition, the sentences could be rather symbolic.

Sindjelic's statement made in March contradicts his earlier testimony, made at the start of the trial. Back then Sindjelic said he was hired by Sirokov to organise a coup in Montenegro in order to prevent its Nato membership. Sindjelic also said that the DF participated in plotting the coup and was supposed to provoke clashes on election night in order to forcefully take over power.

Sindjelic also said in his initial testimony that the DF was aware of the plan and was actively participating in it. He claimed that people he hired provided Kalashnikov machine guns for the plotters. Sindjelic said that the coup plot could have only been organised by members of the DF as they were the only ones aware of the whole plan aside from himself and Sirokov.

The coup plot is believed to have been a last ditch attempt to prevent Montenegro from joining Nato and make a decisive step out of the Russian and into the Euro-Atlantic sphere of influence. Violent protests by the DF in autumn 2015appeared to have the same aim in mind, namely creating an image of instability in Montenegro that would cause Nato members to think twice about admitting the tiny Balkan country.

The DF, the most vocal and best funded opposition party in Montenegro, has always relied on gathering supporters who are pro-Russian and against Djukanovic and his party’s Euro-Atlantic orientation. Yet it has failed to make much headway against Djukanovic’s ruling Democratic Party of Socialists, which has dominated the political scene for decades.

The expected guilty verdicts for the two Russians could further worsen the already bad relations between Moscow and Podgorica, but are unlikely to lead to significant consequences. Montenegro joined Nato in June 2017 and — despite still being a popular destination for Russian tourists — has left its past as “Moscow on Sea” behind as it pursues EU membership as well.

Priests' arrests cause clashes in Montenegro