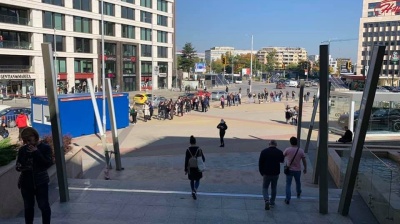 A long queue at a vaccination point in front of a Sofia shopping mall.
By Denitsa Koseva in Sofia October 23, 2021

Long queues for coronavirus (COVID-19) vaccinations have become a common sight in Bulgaria in the last few days after caretaker Health Minister Stoycho Katsarov ordered that only people with green COVID-19 certificates can go to pubs, night clubs, restaurants and shopping malls.

The country, which has the lowest vaccination rate in the EU, is also the world leader in terms of terms of deaths per 100,000 of its population and is third in terms of the case-fatality ratio, according to charts from the Johns Hopkins University of Medicine.

The authorities had been trying for months to persuade people to get the jab so that the country can avoid a fourth peak of the pandemic. However, prior to the introduction of the green certificates, only around 23% of the population was vaccinated.

Since Katsarov’s order was published, the number of daily vaccinations has nearly tripled to almost 30,000. The authorities have opened vaccination points in front of malls and bigger public buildings and in the centres of bigger cities. The single-dose Janssen and Pfizer jabs are the most popular, according to data published by local media.

“Nothing can stimulate Bulgarians as much as the threat of not being able to go to the pub. Nothing is more important than that,” Daniela, a mother of two children, told bne IntelliNews.

The hike of interest in vaccines came as a surprise to many people, but a broadly welcome one.

“Now I realise how much courage is required for what Dr Stoycho Katsarov has done. Yes, with a delay and far from the best way, but the queues in front of the vaccination points justify this,” Christo Komarnitski, a popular cartoonist, wrote on Facebook.

However, sceptics suggest that many of those who now hold green certificates were not really vaccinated, based on evidence that some doctors have been issuing fake vaccination certificates.

“[H]ow many of these vaccines go down the sink? We are lying to ourselves,” Boyan Gruncharov wrote in a comment on Komarnitski’s post.

Although supporters of vaccination have welcomed the introduction of green certificates, some say the measure was taken too late. The number of new coronavirus cases reached nearly 5,000 a day in the past week. Hospitals are struggling to deal with the situation and local media even reported that a hospital in one small town has been putting its patients two to a bed.

There are also critics who say the current situation could have been avoided with proper communication, but the government did not include any mass communication expert in its team.

Prominent PR expert Lubomir Alamanov commented on Facebook that the government should have warned a month or two months ago that the numbers of new cases and deaths were rising and that such measures would be imposed.

“Yes, however strange it may seem, we see how useful and life-saving measures set the whole country against itself,” he wrote.

Caretaker Prime Minister Stefan Yanev admitted the government made a mistake by announcing the measures at the last minute without giving people time to adjust. To soften the situation, Katsarov amended the orders, giving people four days to adjust.

The response from the hospitality industry has been mixed. Katsarov’s original decision sparked protests by owners of bars, night clubs, restaurants and cafes who said this would force them into bankruptcy. This forced the minister to amend the rules the day after he issued the order.

On the other hand, some owners of restaurants have welcomed the green certificate, saying it is better than a lockdown as it will allow them to work. They suggest, though, that clients might need time to adjust.

According to the original order, a green certificate can be issued to people who are either fully vaccinated, or have recovered from coronavirus in the past six months, or have a negative PCR or antigen test. A day after issuing the order, Katsarov amended it, extending the validity of the certificate for recovered people to one year after they have been infected.

The order was also amended to allow green certificates to be issued to people who have received only the first of two doses of the vaccine.

However, Katsarov did not agree to give parents of the youngest students two more days to adjust to switching to online classes in the areas where the number of infected people is above 750 per 100,000.

Kids are the victims again

While Bulgarians are divided over the introduction of green certificates, children again were the victims of the pandemic, switching indefinitely to online classes. The measure split parents and started a virtual war between those insisting on the introduction of green certificates for teachers and regular testing of children so that they can return to schools, and those refusing to agree to any tests for their kids.

“I am not willing to make any compromises,” one Facebook user commented in a group set up to find working solutions that would help return children to schools.

Her opinion was backed by other parents who said that just order and discipline should be enough.

On the opposite side, are the parents who say school closures are the only proper solution to the situation and that a national lockdown is necessary.

However, the bulk of parents were angry and argued the kids are the sole, and the usual, victims in the country. This opinion was also shared by Elisaveta Belobradova, a candidate for MP from the civil quota of reformist Democratic Bulgaria.

“The only citizens deprived from civil rights are the children. I don’t know how the rule ‘We close children last’ turned into ‘We close children only’. … children do not matter to all these people who have agreed to sign this decision. The whole team that has approved it, anyone who does not stand against this decision,” Belobradova wrote on Facebook.

Meanwhile, as bne Intelliews has reported, lockdowns and the lack of in-school teaching have taken their toll on children’s mental health. Aleady, parents have shared that their children have become either apathetic, or easily irritated, just a few days after being forced again to stay at home.