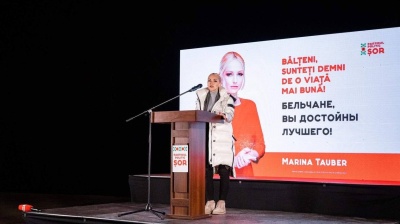 Moldova’s Central Electoral Commission (CEC) invalidated the candidacy of Marina Tauber, the front-runner in the ballot for the mayor seat in the country’s second-largest city Balti, on December 3, on the grounds that her electoral expenditures exceeded the legal limit.

Tauber is a leading member of the Sor party, founded and headed by fugitive businessman and politician Ilan Shor. Her suspension — suspected of being prompted by the ruling Party of Action and Solidarity (PAS) — has damaged the credibility of President Maia Sandu’s party, with some observers drawing parallels with the actions of another fugitive politician and businessman, Vlad Plahotnuic, who previously achieved a high degree of state capture in Moldova.

The excess expenditure mentioned by CEC is estimated at MDL9,514.80 (less than €500). The ordinary court in the city upheld the CEC’s decision, but since the appeal had not undergone all the possible stages by the date of the election (December 5), the ballot was suspended.

Tauber, who received nearly half of the votes in the first round (versus just over 20% received by her rival), pointed to the PAS and Sandu as being behind the “abusive decision” taken by the CEC.

It was an excellent opportunity for former president Igor Dodon’s Socialist Party (PSRM) to vocally accuse the PAS of “capturing the state” the same way Plahotniuc did in the past.

Tauber’s rival is not, however, a reformist member of the PAS, but the candidate of controversial politician and businessman Renato Usatii, who served as mayor of the city for years.

MP and fugitive businessman Ilan Shor, the founder of Sor party, is the visible beneficiary of the money siphoned from Moldovan banks in what is known as “the $1bn theft” surfaced in 2015. Despite this, the voters love him enough to have given him a seat in parliament in the July 11 general election.

Shor’s popularity originates from his activity as former mayor of Orhei, a city that flourished after he took over as a mayor in 2015. The Kroll report into the frauds pointing at him as the visible beneficiary of the bank frauds hasn’t shaken his electoral support. This provided Tauber, a leading member of Shor’s party, with a robust electoral platform in Balti.

The modest amount of money found by the CEC as illegal expenditures, furthermore provided by a transparent sponsor, is not the only peculiarity in this case that puts the credibility of the newly established Moldovan authorities at risk: the money in question was used to provide food to volunteers, and not to bribe voters with in-kind donations.

This may not be relevant for the court’s final ruling, but it damages the credibility of Sandu and her party, who took responsibility for the fate of reforms in the country after they achieved a robust majority in parliament this July.

More importantly, Tauber’s candidacy was invalidated not before the election, but after the first round that she clearly won.

The case reveals the complex effects of the reforms promised by Sandu for the judiciary and the entire state system. It’s not clear whether CEC members were directly asked by the PAS to reject candidate Tauber, but they certainly haven’t ignored the way the new authorities are attempting to impose the rule of law with rather autocratic means. And after 30 years of corrupt regimes replacing one another, expectations are not great.

A relevant case is that of prosecutor general Alexandr Stoianoglo, who is being investigated for misdeeds and his poor performance. Ironically appointed by a committee supervised by Sandu, the prime minister at that time, he was suspended and placed under house arrest after an impressive operation by the special forces, SIS, just before he was due to hold a press conference in early November.

Stoianoglo was far from pursuing major reforms at the General Prosecutor’s Office since he was appointed, but it is equally visible that the prosecutors are having a hard time finding grounds to indict him. The investigations started based on a document a PAS MP drafted that in turn was based on newspaper reports.

A court recently had to renew the 30-day custody for Stoianoglo since prosecutors couldn’t substantiate their allegations except for a breach of regulations when extending some benefits (later returned) to an employee investigated for corruption. Since the indictment is not proceeding as expected, the authorities revitalised the procedures to evaluate Stoianoglo’s activity. But there is a problem: the ombudsman (Sandu’s former lawyer), a member of the prosecutors’ council supposed to evaluate Stoianoglo, recently had to resign after hiring a driver who she previously defended — unsuccessfully — on pimping charges.