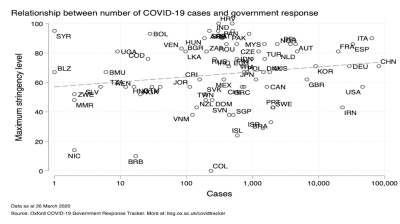 Croatia, along with India, has introduced some of the strictest measures aimed at containing the spread of coronavirus (COVID-19) in the world, according to the Oxford COVID-19 Government Response Tracker (OxCGRT) launched by the Blavatnik School of Government at Oxford University.

The index is based on scores assigned for the stringency of a set of common policy responses governments have taken, using data collected from public sources by dozens of Oxford University students and staff.

Croatia was the first country across the Central and Southeast Europe region to confirm a coronavirus case. In mid-March it announced a raft of social distancing measures, including the closure of all cafes and restaurants, gyms, playgrounds and other venues, as well as banning gatherings and telling companies to find a way for their employees to work from home. Public transport has also been suspended.

Strict measures have also been adopted in several other Central and Southeast European countries such as Serbia, Bulgaria, Hungary and the Czech Republic, according to the index.

Serbia has turned to China for support, looking to learn from the Chinese experience in bringing the spread of the infection under control after the mass outbreaks in Hubei and Wuhan. The country declared a state of emergency earlier in March and introduced a series of restrictions immediately, including a curfew and the closure of public facilities and schools.

Hungarian Prime Minister Viktor Orban announced a curfew for the entire country from March 28 until April 11. People are only allowed to leave their homes to go to work or to run essential errands.

Bulgaria’s health ministry on March 20 banned intercity travel and closed parks, playgrounds and other public areas in new set of measures aimed at limiting the number of coronavirus cases. The government also proposed a controversial law on the state of emergency that critics warned risks jeopardising freedom of speech.

Other countries have also tightened their restrictions in the last few days. In Russia, Moscow Mayor Sergey Sobyanin ordered a lockdown of the city that came into effect on March 30. In measures that are tougher than those in London and Berlin Muscovites will only be allowed outside to shop (and only at a local store), visit a pharmacy, take the rubbish out and walk pets (but only within 100m of their residence).

There are also strict rules in three West European countries that have seen a rapid spread of the virus: France, Italy and Spain.

However, the index reveals that other countries with major outbreaks, notably the US that now has the largest number of cases in the world, have been less stringent.

The OxCGRT was first published on March 25, with data from 73 countries, although more are expected to be added.

“Our index cannot, of course, tell the full story, but we believe the data we have collected can help decision makers and public health professionals examine the robustness of government responses and provide a first step into understanding exactly what measures have been effective in certain contexts, and why,” commented project leader Thomas Hale, associate professor of global public policy at the Blavatnik School of Government.

The National Bank of Ukraine (NBU) has declared that it agreed not to adjust its main policy rate at its monetary policy board meeting on January 21, holding it at 6%.

Pandemic pushes public debt close to 80% of GDP in Albania and Montenegro
11 hours ago
Polish industrial production continues boom in December
19 hours ago
Slovenia’s economic sentiment indicator up 2.2 pp m/m in January
16 hours ago
National Bank of Ukraine retains a key policy rate at 6%, the outlook of the CPI deteriorates
3 days ago
Russia's National Welfare Fund accounts for almost 12% of GDP
3 days ago