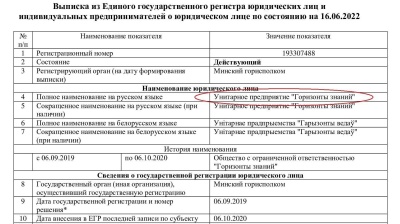 Last year, the Belarusian hacktivists the “Cyber Partisans” managed to hack a terabyte of data from the servers of Belarus’ Interior Ministry (MVD). Since then, they’ve disclosed multiple crimes committed by the Minsk regime. The crimes stretch across several different categories such as physical abuse against opposition activists, crimes against the Wienna Convention as well as several corruption cases.

In a joint investigation, the Belarusian Investigative Centre (BIC) and the Cyber Partisans have recently uncovered how the Minsk regime’s political elite have illegally been secretly financing their children’s education with tax-payer money.

Iryna Abielskaya was Belarusian Strongman Alexander Lukashenko’s personal medic in the 1990s but disappeared from public eye following the birth of Lukashenko’s son Nikolay Lukashenko, and Alexander himself refused to give any comments on Nikolay’s mother.

However, with the help of hacked government data, the Cyber Partisans have now been able to establish that Abielskaya is indeed Nikolay’s mother.

Abielskaya made a reappearance in 2015 during Lukashenko’s presidential inauguration. According to travel data obtained by the Cyber Partisans from the MVD’s travel logs, she one year later flew back from Rome with Lukashenko and their son Nikolay to Minsk after Lukashenko’s official meeting with Italy’s former President Sergio Mattarella and Pope Francis.

A few years later, she became the chief physician of Belarus’ Republican Clinical Centre and also flew with Lukashenko to Vienna when he met with the Austrian Chancellor Sebastian Kurz. However, Lukashenko is more often seen with his private medic, and Abielskaya’s part in Lukashenko’s official activities was never disclosed publicly.

Abielskaya’s venture into the educational sector

Also started in 2019 was the construction project of “Minsk International Grammar School” in the Minsk suburb Drazdy, which is dedicated to top government officials. The sanctioned Russian billionare Mikhail Gutseriev, who is also Lukashenko’s friend, pledged to invest over $12mn into the construction of the school over the course of two years.

The school has a 30,000-square metre property and consists of two four-story blocks and an underground facilitity. The blocks include a broadcasting centre, a photo and video lab, a weapons training room and is surrounded by basketball, futsal, handball and gymnastics courts, a stadium and a car park.

The school was dedicated to host the children of the Minsk regime’s elite, and uncovered documents show that a highly advanced surveillance system was installed by Belarus’ security services to keep the entire area under total control.

While the main building contractor was a company named SertusAvia, the Cyber Partisans have traced the ownership of this company to a Cyprus offshore firm called Blatberg Holdings Limited that’s associated with Mikhail Gutseriev.

Moreover, documents show that the operation of the school was handed over to Abielskaya’s educational company Gorizonty Znanij. However, only a month after the school’s inauguration in 2020, Abielskaya transferred her ownership to Blatberg Holdings Limited.

According to BIC’s sources, Abielskaya placed young Nikolay Lukashenko in the school, discarding the previous more liberal choice of “Lyceum of Belarusian State University”, since it could be unsafe for him due to his political views following the protests against his father’s continued reign in August 2020. Furthermore, BIC’s sources say that Abielskaya had been appointing Nikolay’s teachers and even managing their transportation to the school personally.

Interestingly enough, the school’s current principal, Elena Hrynkievich, used to be a lecturer at the Belarusian State Medical University. While Hrynkievich herself categorically denies that she got her position thanks to Abielskaya, BIC’s sources say that she was indeed behind Hrynkievich’s appointment.

The Minsk International Grammar School’s teachers are only paid $470 a month, have to bring their own lunch and fund their own transportation but do receive a 50% discount for enrolling their own children into the school.

BIC’s estimates show that the annual school fee is approximately $3,000 per child, which would amount to an annual tuition revenue of $1mn.

Despite having this large main income, the tender documents obtained by the Cyber Partisans reveal that the school has regularly been receiving government subsidies.

Between 2020 and 2022, the school received over $100,000 for equipment such as laptops, sound systems and photocopy machines. In 2022, the school also received $40,000 for “facilities and grounds cleaning services,” and for four months in 2021 received subsidies for student lunches.

However, according to Belarusian legislation, such funding may only be granted from September 1 this year.

Upon asking Abielskaya how her school was able to receive this funding for two years before the law came into force, she replied that the question was not for her to answer, but the school’s accountants and administrators didn’t wish to answer the question either.

According to BIC’s sources, the school had indeed no legal basis to receive these government subsidies, and that the school’s founders “twisted the government’s arm” for cash support over the two years. Today when the school is legally entitled to receive such funding, it is still the only one of its kind to do so.

The Minsk International Grammar school is not the only school dedicated to the children of the Minsk elite. Previously, the common “School 16” became the elite “Grammar School 16” after updates to accommodate Lukashenko’s first granddaughter, and his grandson Viktor graduated from there in 2022.

Anonymous online reviews of Grammar School 16 claim that the school forces the children’s highly politically influential parents to give donations for the maintenance of overcrowded classrooms. Lukashenko’s daughter-in-law and her friend are both in the school’s Steering Committee.

While the regime doesn’t hesitate to send the MVD’s “Main Directorate for Combating Organised Crime and Corruption” against opposition activists, independent newspapers and private companies claiming that they’ve for instance forgotten to pay an electricity bill in the right manner, the country’s political elite reigns freely when it comes to corruption.

Through the Cyber Partisans’ documents, and the investigative journalism of BIC, many more corruption cases are bound to be revealed.