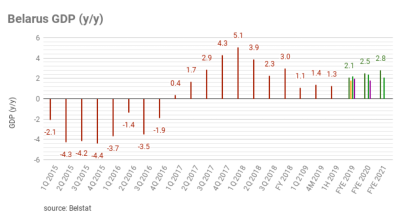 The Belarusian government forecasts a 2.5% year-on-year growth of the nation's GDP in 2020, the Prime Minister Sergei Rumas said on July 30.

The Belarusian economy grew by 0.9% y/y in January-June following a 1% y/y growth in January-May, according to national statistics agency Belstat.

"The entire package of economic forecast documents was scrutinised a week ago," state news agency BELTA quoted Rumas as saying. "The questions raised were discussed in detail with stakeholders. Today we have reached understanding on key issues."

In April, the International Monetary Fund (IMF) revised downward its forecast for economic growth in Belarus in 2019 from 3.1% y/y to 1.8% y/y.

In May, the European Bank for Reconstruction and Development (EBRD) revised downward its forecast for the growth of Belarus' real GDP in 2019 to 2% y/y from 2.5% y/y.

The multinational lender also forecasts GDP growth of 1.8% y/y in 2020. "Risks to the outlook have increased," according to the EBRD's May forecast. "The new energy taxation system being introduced by Russia, the so-called 'tax manoeuvre,' could significantly reduce revenues of Belarus' oil refining industry, thus affecting the fiscal balance and reducing economic and export growth."

According to the Belarusian Finance Ministry, the country’s budget revenue losses from the tax manoeuvre in 2019 alone were estimated at BYN600mn ($300mn), and that the losses might total $2bn by the end of 2024.

However, in December 2018, President Alexander Lukashenko's spokesperson said in a televised interview that Minsk already lost $3.6bn due to Russia's cut of energy subsidies to Belarus. Due to Moscow's tax manoeuvre Belarus will lose extra $11bn within the next four years, the spokesperson added.