Belarus’ IT sector Part I – Growth resilience despite tech-worker exodus 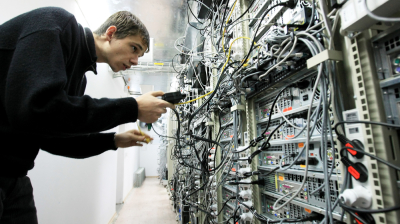 Following the immense domestic repression in Belarus after the fraudulent 2020 presidential elections, many highly skilled IT workers began to leave the country; but after Russia’s invasion of Ukraine started on February 24, a mixture of fears over increased domestic repression coupled with the problems caused by Western sanctions caused a second, even greater, wave of IT workers to flee the small Eastern European nation.

As a result of Russia’s invasion of Ukraine, and Belarus’ participation in it, many IT workers feared that they would be drafted to the army or suffer from the increased domestic repression that was bound to (and which did) follow.

Furthermore, the West imposed harsher sanctions on Belarus than ever before for its compliance in the invasion, disconnecting all the country's major banks from SWIFT, as well as imposing export bans on certain high-tech products. This, along with Western companies’ worries of a damaged reputation by working with Belarusian companies, caused many companies and tech-workers to relocate abroad.

Russia, Ukraine and Belarus have all seen a mass emigration of their IT workers since the beginning of the war. However, to quote a senior director from an international IT firm which has been relocating its Belarusian workers during the spring, Belarus’ tech workers are mentally “further along”, since many have been prepared to or seen their colleagues emigrate since autumn 2020.

During 2021, many Belarusian tech workers went to nearby EU countries Poland and Lithuania, but many also left for neighbouring Ukraine. These people were once again forced to flee this year as Russia began its invasion. Many went to EU countries, while others fled to the Caucasus or Central Asia.

The reported number of tech workers fleeing Belarus varies. According to Franak Viačorka, Senior Advisor to exiled Belarusian opposition leader Svetlana Tikhanovskaya, 40,000 Belarusian IT specialists have been given Polish visas in the last two years. Moreover, according to the president of the board of the Polish Investment and Trade Agency, around 20,000 Belarusians have received recommendations to relocate to Poland since February 24.

Other Belarusians made their way to Georgia or to the Central Asian countries Kazakhstan and Uzbekistan. In what has been called the “Tash Rush”, Uzbekistan organised flights to Minsk after the war broke out in order to fly IT specialists from Minsk to the Tashkent IT Park.

Uzbekistan Airways is currently one of two foreign flight carriers operating in Belarus, and while the narrative of “the official Minsk” is that this is good for its economy, it might actually be facilitating the country’s brain drain.

The exodus of Belarus’ IT specialists is a devastating blow to the quality and scope of Belarus’ IT sector. In the long run, it will also affect the country’s overall economic performance, since the IT sector has long been the only sector able to lift the Belarusian economy in times of crisis.

Despite the harsh sanctions and the exodus of highly skilled tech workers, Belarus’ IT sector has shown remarkable growth resilience during the first half of 2022.

In January-May, Belarus’ IT sector grew by 8.3%, while the manufacturing industry, agricultural and construction all showed negative growth numbers. According to Dmitry Kruk, economist at the Belarusian Economic Research and Outreach Centre (BEROC), this exceptionalism could be due to several reasons.

First, not only software and product developers are accounted for in the term “IT Sector” but also information and communications companies, which includes foreign telecom operators such as A1 and MTS. Due to their size, these companies could greatly boost the sector’s growth statistics.

Secondly, the IT workers who are leaving are being replaced by younger IT workers, and while they contribute less value-added than their more experienced predecessors, they still help to smooth out the sector’s employment and wage dynamics somewhat.

Thirdly, the profits that we’re seeing now are mostly coming from the closing of old projects. As a result of the sanctions and relocations, however, we might not see many new projects begin this year.

There are also signs that the Minsk regime is worried about precisely this, when it initiates large scale public procurement projects for IT services to boost domestic demand.

Here, it’s worth noting that a loss of imports isn’t always good, as it’s portrayed by Belarus’ Economy and Finance ministries; it also means problems for intra-industry trade and increases the risks of supply chain disruptions in domestic production.

Despite its growth numbers, the IT sector instead appears to be stagnating overall, which Kruk and his colleagues at BEROC also predict will happen during the second half of 2022 and onwards.

When assessing the current situation for Belarus’ IT sector, it’s more important to look at what could have been rather than what is. Without the sanctions and the domestic repressions, Belarus’ IT sector’s growth would have been a lot higher than it is now. Instead, the exodus of Belarus’ IT workers is strongly boosting dynamic economic developments in the neighbouring EU countries, as well as in Georgia and Uzbekistan.

The problems in the IT sector also have farther reaching implications for Belarus’ economy due to their synergetic effects. For instance, stagnation in the IT sector will make it harder to recruit skilled workers to other sectors and to find domestic tech-innovations suitable for state-owned companies’ digitalisation projects.

The Minsk regime has deemed digitalisation to be a crucial part of its import-substitution policy, which aims to dampen the negative effects of Western sanctions. It recognises the importance of the IT sector not only in maintaining economic stability, but also in improving its vast security apparatus’ defensive and offensive cyber capabilities.

This is especially important now, as the regime avoids directly using its army in Russia’s invasion but bolsters its capacity to engage in hybrid warfare.