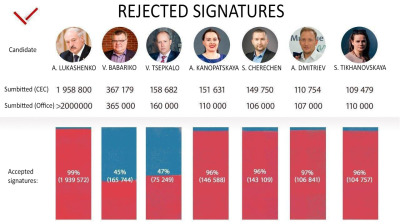 There will be no independent observers for the August 9 Belarusian presidential elections, giving the authorities a free hand to fix the result. And it remains unclear who will be allowed to run, but if one of the two remaining opposition candidates is accepted the other may drop out to focus the vote in opposition to Belarus President Alexander Lukashenko.

The Belarusian Central Election Commission (CEC) announced that it would not have a press centre or a running tally of vote counting on election day. The results of the highly contested vote will be only announced the next day after vote counting is completed, the organisation said on June 7.

The OSCE also announced that it will not be sending any observers to the election. At the same time, independent observers and exit polls conducted by anyone other than the state accredited authorities are illegal in Belarus.

Seven candidates submitted applications to run in the race, including three opposition candidates that hope to oust the incumbent Belarus President, Alexander Lukashenko, who has been in power for 26 years.

The country has been swept by unprecedented but low-level street protests following the arrest of ex-banker and leading opposition candidate Viktor Babariko, who is currently the front-runner amongst the non-establishment candidates. Popular blogger Sergey Tikhanovsky has also be arrested and was unable to submit an application to run in the race, but his wife Svetlana Tikhanovskaya is standing in his place.

Former diplomat, businessman and one-time Lukashenko aide Valery Tsepkalo is the third leading opposition candidate, but he has already been excluded from the race after the CEC rejected almost half his signatures on a mandatory petition to run, bring his total to less than the 100,000 needed to qualify for the race.

Lukashenko is of course running and submitted over 2mn signatures. The other three candidates are pro-regime and widely seen as straw men who are in the race to give it a veneer of legitimacy. 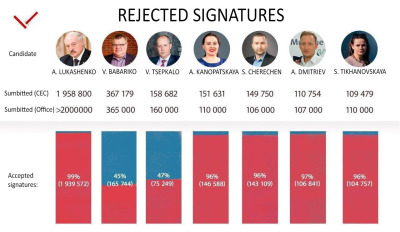 Observers doubt that Babariko will be allowed to progress to the race, despite the fact that he will be hindered in his campaign, as he remains in pre-trial detention in a KGB prison cell. Criminals are barred from running in the presidential race, but as Babariko has yet to stand trial for the charges of fraud, embezzlement and money laundering brought against him, technically he is still eligible to stand.

However, Babariko is vulnerable to other rules that could preclude him. Candidates must submit detailed income statements listing not only their own assets but those of their immediate family. Babariko declared just under $1mn worth of savings and assets, and after running one of Belarus’ biggest commercial banks, is a wealthy man. However, as the KGB has already accused Babariko of embezzling some $430mn, it is possible the CEC will find something wrong with his income statement.

Another rule bans anyone who receives campaign funds from a foreign power and Babariko’s Belgazprombank is ultimately owned by Russia’s national gas company Gazprom. Lukashenko has already publically accused the opposition leaders of being puppets of Poland and Russia that are trying to interfere in Belarus’ domestic politics.

The local liberal press have suggested that if any one of the opposition candidates make it into the race then the others should withdraw in order to rally the protest vote behind a single name to maximise their chances of winner.

According to the local newspaper Nasha Niva, Tikhanovskaya says she is ready to withdraw from the race and endorse Babariko, should he become an official candidate in the race.

From the remaining three candidates that are seen as spoilers, Andrei Dmitriev and Sergei Cherechen has suggested they might also withdraw from the race if their applications are approved. That would leave the remaining pro-regime Anna Kanopatskaya as the only other contender, who is, “on her way to becoming the most despised person in Belarus,” according to Tadeusz Giczan, an academic in London who studies Belarusian politics.

Belarusian government sees $2bn of withdrawals, issues $580mn worth of bonds in 2020