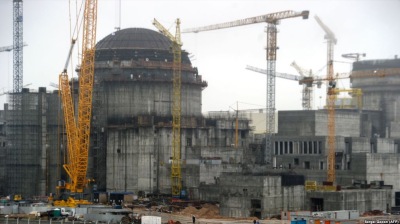 Belarus will start up the controversial Ostrovets NPP early just ahead of the presidential election
By bne IntelliNews August 5, 2020

Operations at the first unit of the new Belarusian nuclear power plant (NPP) in Ostrovets, near the Belarusian-Lithuanian border, are being launched early and slated to start in the next few days, the Press Secretary of the Belarusian Energy Ministry, Olga Kozlovich, told Belarusian news agency BelTA on August 5.

According to the source, all equipment has been tested and made ready for the launch. The personnel of the Belarusian NPP has been trained and have done the necessary exercises to perform fuel-loading operations.

The early launched is thought to be a political stunt by Belarus president Alexander Lukashenko as a boast ahead of the presidential election due at the end of this week. As bne IntelliNews has reported the construction of the Ostrovets NPP has been highly controversial. It produces more power than Belarus needs, yet the countries Baltic neighbours have refused to import power from Belarus, seeing it as a Kremlin-project.

The physical launch will start with the insertion of nuclear fuel into the nuclear reactor core. A total of 163 fuel rod arrays will be placed inside the reactor. The main circulation pumps will be turned on in order to warm up the coolant in the primary circuit of the reactor unit to its design parameters. The original plan was to start the power station this autumn.

Lukashenko said on August 5 that the advantages of a Belarusian NPP will help his country make a breakthrough.

“The significance of [the] Belarusian NPP for ensuring energy security and the economy of our country as a whole is simply enormous. Development of education and technology is associated with it. So, we do not need to point out and poke at security issues. We are the Chernobyl republic, we have gone through a lot. We ourselves know the cost of the consequences. $19bn was spent on the rehabilitation of contaminated areas only. Therefore the entrance control during the construction of the station was like in wartime. And the advantages that we will acquire will help us make a breakthrough into the future (high technologies, cheap electricity, electric cars),” President Lukashenko was quoted by BelTA as saying, “or the ultra-modern production of amino acids of our biotechnology corporation, which we are building together with China in Minsk Oblast. Thanks to such production, the green economy will become our reality from a fashion trend,” he added.

The Belarusian leader stressed that over the past five to six years, the collection of certain types of secondary resources in Belarus has grown 2.5 times.

"And this is free raw materials that are lying under our feet. We have decided to abandon disposable plastic dishes and containers from 2021. They will be replaced by environmentally friendly packaging. I will support other proposals in this field. By the way, we have been talking less and less about space lately, but I dare to remind you: small in size but rich in talented people, Belarus is a member of the club of space powers. Just think," Lukashenko added.

However, the legacy of the Chernobyl disaster in 1986 has created a sensitivity to Russian nuclear power for Belarus’ immediate neighbours, especially Lithuania.

Lithuania has voiced the most vocal objections, as the reactor is being built only 45 km from its capital Vilnius. President Gitanas Nauseda called for measures to “prevent countries with unsafe nuclear power plants” from exporting electricity to Lithuania, which has legislatively barred imports of Belarusian electricity.

"The plant is being built in breach of safety standards, including the UN’s Espoo and Aarhus conventions," Arvydas Sekmokas, Lithuania’s former energy minister, said. "Minsk has disregarded International Atomic Energy Agency (IAEA) recommendations made after the Fukushima disaster that plants should not be built within 100 kilometres of major population centres." The Espoo Convention states that all countries must consult their neighbours on the potential cross-border environmental impact of a nuclear project.

MITTELEUROPEAN INSIGHTS: Better $1.5bn from Russia or €1bn from the EU in the hand than $15-20bn in the bush?

Belarus' IT workers exit the country

Lukashenko inaugurates himself in secret
MITTELEUROPEAN INSIGHTS: Better $1.5bn from Russia or €1bn from the EU in the hand than $15-20bn in the bush?
Belarus' IT workers exit the country