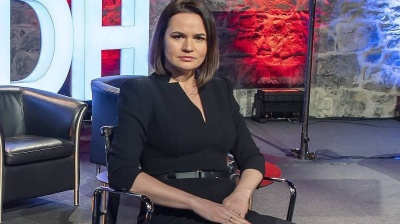 Belarus opposition leader Svetlana Tikhanovskaya has called for an online vote to be held on launching talks with international mediation between the opposition and Belarus' self-appointed President Alexander Lukashenko's regime.

"I announce the beginning of the nationwide vote. Everyone knows that there is a crisis in the country, and we can only overcome it peacefully through negotiations with international mediation. […] We launch this vote not instead of street protests but along with street protests," Tikhanovskaya said in a video address released on March 18 as cited by Tass.

Tikhanovskaya said the vote and the talks would run in parallel with the mass protests that have wracked the country since the disputed presidential election last August 9.

The large weekend protests petered out during the freezing winter months, but earlier this month Tikhanovskaya called for a new mass protest on March 25, the day Belarusians celebrate their brief intra-war period as an independent country.

Tikhanovskaya reiterated her calls for peaceful demonstration and said the way forward was to find a negotiated solution to the political deadlock.

The opponents of the authorities chose "not weapons, but a non-violent protest and a fair vote," Tikhanovskaya said. "The more there are our votes, the louder becomes our demand to solve the crisis peacefully and without new victims," the former presidential candidate noted, adding that "a vote for negotiations is a vote for saving hundreds of inmates, who suffer in prisons for their opinion."

"This is a step towards the state where people and their views are respected, where salaries and prices are just. And, what is very important: this is a specific signal to action for international partners," Tikhanovskaya said.

In her call for talks she reached out to those members of Lukashenko’s regime that are unhappy with the president’s attempt to defy public opinion and hang on to office after 26 years in power. Tikhanovskaya specifically called on those “representatives of the authority who are ready to think about the future and make mature decisions, instead of prolonging the crisis until a full-on catastrophe."

Tikhanovskaya believes that "there are such people" in the current authority, and that "they need negotiations no less than we do, because violence and lawlessness [has] worsened their life, too."

The opposition are attempting to undermine the loyalty of Lukashenko's lieutenants and are hoping a large turnout and overwhelming vote by the people will increase the pressure on Lukashenko and highlight the lack of support he actually has amongst the Belarusian people.

Tikhanovskaya said she would turn to international organisations such as the OSCE or the UN to mediate in the talks.

"They are ready to provide a venue and mediation, as well as coerce the regime into negotiations. The most important thing, though, is that our votes will give us back the feeling of unity, majority and power," Tikhanovskaya said.

Belarus' gold and foreign currency reserves rose 4.9% to $7.3bn as of May 1
Lukashenko signs decree on the transfer of power in the event of his death
Jailed Belarus presidential candidate Tikhanovsky charged with plotting mass riots