Belarusian protester cuts his own throat during court hearing 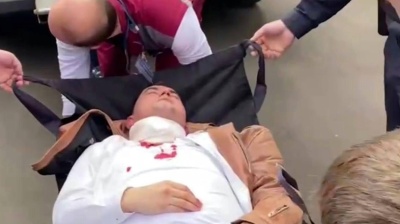 Belarusian protestor Stsyapan Latupau handed out flowers to the ladies during the women's demonstrations last year and was arrested. At his arraignment on May 31 he cut his own throat in the court room rather than incriminate himself. He is in hospital reportedly in a stable condition
By Ben Aris in Berlin June 2, 2021

The stories of personal tragedies and horrific police repression coming out of Belarus are almost a daily occurrence. And yet the Belarusian story has fallen off the front pages of the international press, despite its recent revival after Belarus' President Alexander Lukashenko forced the Ryanair commercial to the ground to arrest top opposition journalist Roman Protasevich on May 23.

Most of the stories go unreported. Most of the small demonstrations go unreported. But they are not unnoticed. Social media continues to document these acts of violence against a largely peaceful populace that refuse to accept Lukashenko as the legitimate leader following his blatant falsification of the August 9  presidential elections last year.

The defiance of the otherwise dour Belarusian people is awe-inspiring. Babushki clobbering beefy OMON offices with their red and white flags and when those are removed kicking them in the shins because they can't reach their faces. The passers-by that suddenly pile in to rescue a woman who the security forces are attempting to bundle into a van. The leaders like Maria Kolesnikova who tear up their passports and throw the pieces of KGB officers attempting to shove her across the border.

But the defiance has a black side too. Last week, 18-year-old Dzmitry Stachouski committed suicide after being persecuted by the police who threatened ihm with 15 years in jail for attending protest ralies. His body was cremated today on May 31. Ten of his fellow students were permitted to attend. No one else. All their phones were confiscated before the ceremony. 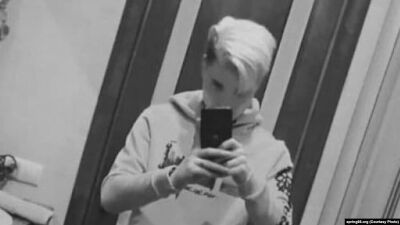 18-year-old Belarusian Dzmitry Stachouski committed suicide last week after police threatened him with 15 years in jail for participating in protests.

And the week before 50-year Vitold Ashurak died in custody, officially from heart problems, who was also arrested for protesting. In a bizarre twist to the story the authorities released a video of the moment of his death to prove that he didn't die at the hands of his jailors. But the scene that played out in front of hundreds of thousands of his fellow countrymen was more damaging due to its patheticness. Ashurak was shown alone in a cell, where he collapsed, hitting his head in his fall. Prison guards eventually appeared and Ashurak regain consciousness briefly, only to die a few moments later, alone and without recourse to the medical care that might have saved his life.

Now a new tragedy played out on June 1. Stsyapan Latupau embraced the protests and famously went down to one of the main squares in the centre of Minsk on the Saturday, when the women of Belarus held their own protest in solidarity with the main mass Sunday demonstrations.

He arrived with a big bunch of flowers and proceed to walk around the square handing out flowers to the women in gratitude, to rounds of applause from onlookers. For this act of defiance and others he was later arrested.

“On August 12, when "Women in white" protested in Minsk downtown, Stsiapan Latypau gave away flowers. Now Latypau is fighting for his life. He must live! He could not stand torture in the Belarusian prison and cut his throat in court today. Lukashenka must be held accountable,” Franak Viacorka, opposition leader Svetlana Tikhanovskaya’s spokesman, said in a tweet.

Latypau is a resident on the so-called “Square of Changes” where a famous mural of two DJs that defied Lukashenko’s crackdown was painted on the side of a utilities building. Every day the police would come and paint it over. Every night the residents would repaint the mural. Eventually the police stationed a guard at the wall to stop it reappearing. But the residents just waited until the guards eventually went to sleep and by morning the mural was back.

On September 15, 2020, Latypau was brutally detained and heavily beaten after asking Lukashenka’s policemen questioning him to show their IDs. He was taken to a detention centre and there subjected to torture, claim the opposition.

At his arraignment on May 31 and unremittingly defiant he testified about torture in prison and threats made by jailors against him and his family.

“His last words before he cut his throat were: "GUBOP (the most infamous police unit in Belarus) promised that if I don't plead guilty, there will be criminal cases against my relatives and neighbours," Tadeusz Giczan, the new editor-in-chief at the opposition Nexta Telegram channel reported.

Latypau then rummaged in a packet of documents he had with him in the courtroom glass holding cell and used a pen to cut his own throat and slash his wrists.

“Stsyapan Latupau preferred death over admitting false allegations. Lukashenka's thugs threatened him to start criminal cases against his family. This is what they do – they intimidate prisoners with harming their relatives & loved ones. Inhumane and cruel. This must be stopped,” Viacorka commented.

“Medical workers were called arrived in a courtroom. Latypau lost consciousness. The guards couldn't immediately open the cage's door (why was he held in a cage at all?). His father says he's been in a punishment cell since April,” Hanna Liubakova, as well-known opposition journalist reported.

“Sciapan underwent surgery, no damage to vital organs was found. According to witnesses, he had a folder with documents with him on trial. He took an object from it, perhaps a pen. This is what he stuck in his throat and began cutting it. Then he fell and began cutting his wrists,” Liubakova reported.

The latest reports say that Stsyapan is now in hospital and in a stable condition.

THE VIEW FROM MITTELEUROPA: Surviving on life support – Belarus, sanctions and path-dependency
Lukashenko pushing illegal Iraqi refugees over the border into Lithuania
Belarus is the “North Korea” of Europe, says US diplomat

Hungary’s most powerful oligarch says he is just a lightning rod for attacks on Orban
15 hours ago
US sanctions on Russia’s OFZ local debt come into force
16 hours ago
Moscow back on lockdown as coronavirus infection rate surges again
23 hours ago
Lukashenko pushing illegal Iraqi refugees over the border into Lithuania
23 hours ago
Belarus is the “North Korea” of Europe, says US diplomat
3 days ago