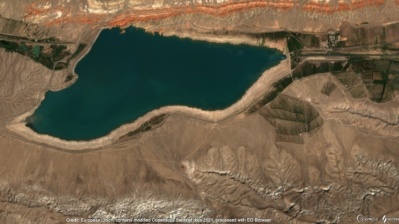 A comparison of Sentinel 2 imagery between July 2018, in the summer after the most recent period of heavy spring rainfall, and July 2020 (see below), at the depth of the dry spell, shows a clear reduction in the Torkul Reservoir’s capacity.
By Kanat Shaku in Almaty August 5, 2021

Open-source investigative unit Bellingcat has concluded that the deadly border clashes that broke out between Tajikistan and Kyrgyzstan in April may have been at least partly triggered by tensions caused by consequences of climate change.

While border disputes between the two Central Asian states have been commonplace in recent decades given the less than ideal demarcation of the frontier stemming from Soviet times, the situation this year produced a major escalation, with dozens killed, hundreds injured and thousands fleeing their homes. The spark was reportedly a disagreement over the installation of security cameras at the Golovnaya water distribution point in the border area between Tajikistan’s Sughd Region and Kyrgyzstan’s Batken Region. The Golovnoy water reservoir technically serves as a sluice on the Isfara River, controlling the flow of water to areas of Tajikistan and Kyrgyzstan, making it integral to the irrigation of both Kyrgyz and Tajik farmlands. 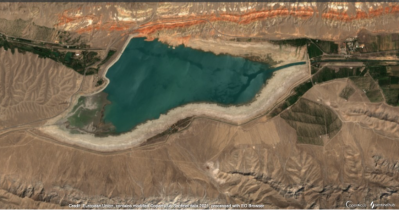 Using Landsat 8 and Sentinel-2 satellite imagery, as well as other open sources, Bellingcat found that data indicates that the area around the facility and along the Kyrgyz-Tajik border at large saw lower ground temperatures, less rainfall and poorer vegetation health in the year preceding the April clashes.

Its investigation determined that in 2020 the heavy seasonal rains that usually feed Kyrgyzstan’s main Tortkul Reservoir “slowed to a trickle”. Precipitation levels in 2020 dropped to their lowest levels since 1995, Bellingcat also wrote. Moreover, the abject lack of rain last year followed a three-year spell of decreasing rainfall in the area.

“Water supplies on either side of this intricate and often contested border are so interdependent that a single disruption, let alone the one-two punch of a decreasing water table and a cooler climate, wreaks havoc on Kyrgyz and Tajik farming communities,” the report added.

Landsat 8 time-lapse imagery corroborated an apparent decline in agriculture between 2019 and 2020 in the area where the clashes broke out, said Bellingcat, noting that two images, taken a year apart, “show thick, dense fields in 2019 followed by sparse, patchy land in 2020”.

However, the report conclusion stated: “It would be a stretch to say that the changes above were the direct cause of April’s clashes. To be clear, the recent conflict was immediately precipitated by the security camera dispute at the Golovnaya water distribution point. However, environmental changes could spell structural issues for local agriculture in the long term, exacerbating the potential for further disputes as resources dwindle.”

The report concluded that if farmers in the two countries were, based on meteorological trends, to anticipate that even less water will be available in future for farming and there were even lower crop yields in 2021, control of the Golovnaya sluice and the water that flows through it could be seen as critical to local food supplies.

It also observed: “By itself, open source imagery can not shed light on all these complex dynamics [that must be considered in determining what led the border clashes]. Nonetheless, since 2019, satellite measurements can and do show that farmers in the region had to contend with not only less water with which to grow their crops, but also cooler than usual temperatures. These may have combined to produce nearly record low farm yields in the 2020 harvest, in turn raising anxiety over 2021 yields.

“As greenhouse gases and other man-made factors continue to change the earth’s climate, threatening failing crops and incipient drought, historical disagreements over who controls increasingly scarce resources take on a new urgency. Under these circumstances, a small provocation, like the installation of security cameras, can provoke a confrontation that ravages the region.”