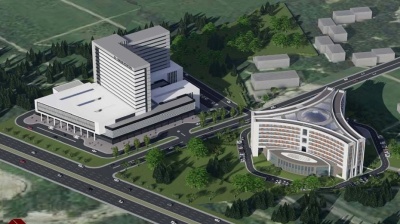 Artist's impression of the planned science and technology centre.
By Kanat Shaku in Almaty January 26, 2021

The centre will be administered by Al-Farabi Kazakh National University. It will include three major clusters focusing on innovation, the biomedical and information technology (IT).

The financing is to be allocated according to a stage-by-stage format spanning four years. Gorkem Construction will build all facilities and supply them with the necessary equipment. The project will launch this year.

The information technology cluster will aim to bring together around 150 “leading universities”. It is set to be centered around a technology park and a supercomputer provided by the Chinese government under an agreement signed during a trip to Beijing made by Kazakh President Kassym-Jomart Tokayev.

Galimkair Mutanov, president of Al Farabi Kazakh National University, said the biomedical cluster would draw on the experience of South Korea, Canada, Turkey, and the US to offer medical services. The cluster will include a 500-bed multidisciplinary clinic featuring a research laboratory.

“We expect leading specialists from Turkey and Kazakhstan to work here, which will help train highly qualified specialists. In the first stage, we are planning to create 500 new jobs, and in the future, we will increase to 1,000 jobs,” said Osman Mimarsinanoglu, chairman of the board at Gorkem Construction, according to a report by Khabar 24 news agency.

The Almaty-based Al-Farabi Kazakh National University, or KazNU, was founded in 1933. It currently ranks as one of the largest universties in the country.

The project is part of a government-led strategic development programme to enhance KazNU’s international competitiveness by 2025.

Kazakhstan, under its “Digital Kazakhstan” programme, has set a goal of attracting Kazakhstani tenge (KZT) 67bn (€130mn) into its IT sector by 2022. The country also hopes to reach 30th place on the Information and Communication Technologies Development Index (IDI) and 63rd on the World Economic Forum’s (WEF’s) “Ability in Innovation” ranking by the same year.

The Central Asian nation has based these goals on the expectation that up to 60% of global GDP will be “digitalised” by 2022.