Births, marriages and deaths all down in Latvia in 9M20 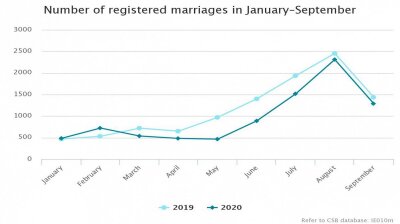 Data released by Latvia’s Central Statistical Bureau (CSB) on October 19 show that the first nine months of 2020 produced 8,694 marriages in Latvia, which is 1,865 or 18% fewer year-on-year.

Numbers of births and deaths were also down on the year. Between January and September, 13,500 live births were registered, which is 731 or 5.1% fewer births than in the first nine months of 2019.

This year, 20,600 deaths had been recorded by the end of September, which is 102 or 0.5% down compared to January-September last year. In nine months, the population decreased by 7,100 as a result of natural population change (it decreased by 6,500 in the corresponding period of 2019).

Capital Economic’s economic sentiment indicator took a step down in November after a broad-based recovery since April across Central and Eastern Europe (CEE).

Some Nasdaq Baltic indexes show a noticeable improvement since the news of successful coronavirus vaccine trials broke earlier this month.