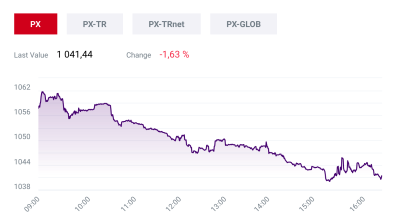 The Prague Stock Exchange experienced the most significant daily slump since the Brexit referendum in June 2016. The PX Index weakened by 2.81% to 1,058.69 points, to its lowest value since the end of October 2019, due to coronavirus concerns, Patria reported on February 25.

“The phantom of coronavirus, which has spread to 30 countries, is bypassing the markets,” commented Patria Online analyst Jana Knechtlova, adding that shares in the tourism and luxury sectors have declined the most, followed by the shares of automobile and mining companies.

Almost all major titles weakened on the Prague Stock Exchange on February 25, Avast fell by 3.82% to CZK126 (€5), Komercni Banka, the mobile operator O2 and the insurance group VIG each by more than 3%, with the only exception of Central European Media Enterprises (CME), which saw an increase by 0.19% to CZK104.

“While the depreciation of the Polish zloty or Hungarian forint was relatively uninteresting, the Czech crown has lost today three-quarters of a percent compared to Friday,” added Komercni Banka’s chief economist Jan Vejmelek, quoted by the Czech News Agency.

According to the Next Finance chief economist Vladimir Pikora, the exchange rate of Czech crown against the euro returned roughly to the end-January level. There is still room for further weakening, he added.

“Concerns about the future are more than enough to actually spread pessimism. E.g. the Czech Ministry of Foreign Affairs no longer recommends Czech citizens to travel north of Italy to areas facing coronavirus spread,” he explained.

Coronavirus threat pushes businesses online
THE MITTELEUROPEAN VIEW: Why it is exactly the right time to fully revive the Vienna Initiative 1.0
CEE hotel deals put on hold amid coronavirus pandemic

Government coffers seen as empty after currency crisis fight. “Fearful of joining the army of unemployed, many workers have had no choice but to brave the virus danger,” says economist.