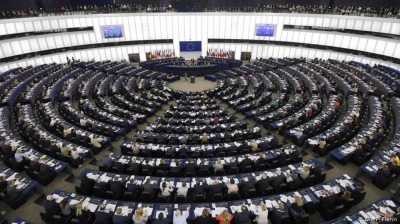 The European Parliament has backed a resolution to cut methane emissions across multiple sectors
By bne IntelliNews October 25, 2021

In a resolution on the EU’s strategy for cutting methane emissions, MEPs voted 563 to 122 in favour of introducing binding measures and targets on methane abatement, in order to significantly reduce emissions by 2030, in line with Paris goals.

“MEPs want to phase out all fossil fuels in the EU as soon as possible. As imports make up over 80% of the oil and gas consumed in the EU, fossil fuels should only be imported if they comply with EU regulations, MEPs demand,” Parliament said. “Leak detection efforts should be boosted with strict reporting and a requirement to repair potential leaks within a clearly defined period.”

The EU is looking to establish a leadership position in the drive to reduce global emissions of methane, which is a far more potent greenhouse gas (GHG) than CO2. In September it agreed with the US on delivering a 30% reduction in methane emissions within a decade, and 36 countries have already joined the pledge.

MEPs also noted that agriculture accounts for the largest share of anthropogenic methane emissions, primarily as a result of cows and other livestock. They want new measures to reduce those emissions as well, “while ensuring that food production is not just moved outside the EU by insisting that imports from non-EU countries meet the same high standards as products made in the EU. They also stressed the need to make reductions in the waste sector.

“We need a quick win to tackle climate change!” Parliament rapporteur Maria Spyraki said. “We must act immediately and achieve concrete results on reducing GHG emissions to protect people and the planet today and in the future. By setting binding methane reduction targets, the EU can play a key role in getting the rest of the world to do the same.”

After publishing its methane strategy last year, the European Commission is currently working on a draft legislative proposal to govern energy sector methane emissions. It is due to be published in December.

Commenting on the proposal, European Energy Commissioner Kadri Simson said the legislation would be based on two key pillars. First, it will strive to “improve the accuracy of information on the exact amounts and main sources of methane emissions to allow for more effective and more targeted methane abatement measures.” Second, it aims to “achieve immediate emission reductions across the energy supply chain, by intervening on those fronts where action is possible. This includes mandatory leak detection and repair and limiting venting and flaring.”

The commission is also “exploring the possibility to incentivise methane emission reductions outside the EU, from our trading partners,” it said.

“The EU is a global fossil fuel importer and must use this leverage to foster methane emissions commitments among its suppliers,” it said. “This can only be a progressive process. We will work on further measures once more accurate and reliable data becomes available.”

Russia and other gas suppliers to Europe are devising their own methane rules and targets in order to ensure that emissions do not put them at a disadvantage to their rivals.