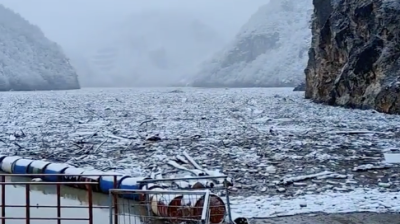 A massive floating waste dump is covering sections of the Drina River in Bosnia & Herzegovina, a video posted by the Eco Centre Visegrad NGO on Facebook shows.

Aerial footage of the river shows the extent of the environmental disaster near the eastern town of Visegrad, on the border with Serbia. In the Serbian part of the river, floods have also brought tonnes of waste downstream.

According to Eco Centre Visegrad, the waste is coming from the Lim river and via upper Drina river basin.

This is a common problem in the Western Balkans, where waste management is gradually improving but has as yet failed to keep up with economic development in the region. The NGO said same thing has happened every time there are heavier rains or snowfalls for the past two decades.

“These quantities exceed ten thousand cubic metres. The thickness of this layer is more than half a metre. In addition to plastic, refrigerators, trees are a big problem, because it is hard to remove them from water,” Dejan Furtula of the Eco Centre Visegrad told N1.

He added that the waste removed for six months every year but then it keeps coming.

The NGO plans to carry out a two-year study to find out the level of water pollution and where it comes from, and then to get proper equipment to clean the river.

Furtula said the problem is common for Bosnia and Serbia but none of the countries in the region has made significant effort in terms of international cooperation.

According to the NGO, the problem with the waste could be solved if all landfills on river banks are relocated to other areas.

In neighbouring Serbia it was previously reported that tonnes of floating waste and other debris had built up behind a barrier across Lake Potpec after heavy rains. The waste was carried downstream on the Lim River that flows into Lake Potpec, gathering behind the barrier stretched across the lake to protect the Potpeć hydroelectric power plant (HPP).

Hundreds of protesters currently trying to halt the continued development of a coal mine in Germany – which would involve the destruction of the now abandoned village of Lützerath – are putting pressure on the government to phase out coal use.