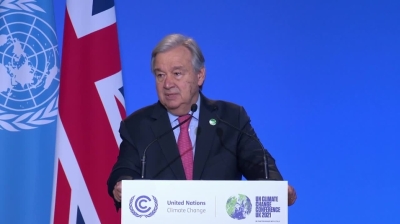 UN Secretary-General António Guterres told the COP26 summit that much work remains to be done to fill the emissions gap and the finance and adaptation gap, despite welcoming the agreements on forests, methane and coal made so far.

His comments came as the conference waited for a new revised version of the draft agreement, which was published for the first time on November 10.

Discussion of the revised document, which will have to be agreed upon unanimously, is set to take place into November 12.

The agreements on forests, methane, clean technology and coal were encouraging, he said.

“But they are far from enough. The emissions gap remains a devastating threat. The finance and adaptation gap represents a glaring injustice for the developing world,” he warned.

He also stressed that fossil fuels were still receiving subsidies from governments, and some countries are still building new coal power plants.

“Promises ring hollow when the fossil fuels industry still receives trillions in subsidies, as measured by the IMF,” he said. “Or when countries are still building coal plants.”

The draft agreement contains for the first time a call to phase out coal power plants and fossil fuel subsidies, although this is expected to be a major source of contention as negotiations continue overnight.

“Governments need to pick up the pace and show the necessary ambition – we cannot settle for the lowest common denominator,” Guterres warned.

Looking at the positives of the conference, he welcomed that new voices such as the private sector, cities and municipal authorities, young people, women and indigenous communities, which have all made their voice heard.

“I am inspired by the mobilisation of civil society, by the moral voice of young people keeping our feet to the fire, by the dynamism and example of indigenous communities, by the tireless engagement of women’s groups, by the action of more and more cities around the world, by a growing consciousness as the private sector aligns balance sheets and investment decisions around net zero.”

Looking ahead, he said that the UN would set up a regulatory body with real power to oversee the quality of standards and targets in a bid to avoid greenwashing.

This would prevent companies and governments making emissions and climate changes pledges without the ability to carry them out.

“We have a critical mass of global commitments to net zero. We must now zoom in on the quality and implementation of plans,” he said. “That is why I have decided to establish a High-Level Expert Group to propose clear standards to measure and analyse net-zero commitments from non-state actors. We need action if commitments are to pass the credibility test.”

At the start of the conference, Guterres warned that “we are digging our own graves.”

“Enough of brutalising biodiversity, killing ourselves with carbon, treating nature like a toilet, burning, and drilling and mining our way deeper,” he said.