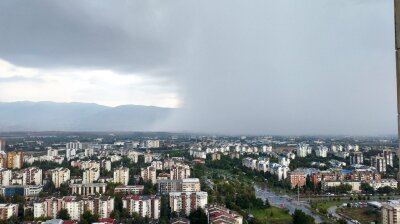 Skopje’s mayor Danela Arsovska said that rescue teams intervened in more than 30 locations where flooding was reported, following the heavy rains and strong winds in North Macedonia’s capital on August 30.

The floods that have affected North Macedonia in the last few years are reflect changes to the climate over the years. According to studies, rainfalls and flooding now happen more frequently due to the fact that the warmer atmosphere can hold more moisture, causing higher precipitation.

Another problem for Skopje is the insufficiently developed sewage network, which does not allow excess water from heavy rains to be redirected to the Vardar River.

Streets around Skopje’s centre were flooded, causing traffic chaos and forcing the traffic police to intervene. Many parking lots, basements and garages were also filled with water. There were reports of roofs and billboards collapsing,

According to estimates, more than 20 vehicles have been damaged and dozens of trees in Skopje were uprooted, Angelov added.

Several cars and a van were flooded near downtown Skanderbeg square, where 14 people asked for help to get out.

There were no reports of deaths unlike the previous disastrous floods in Skopje on August 6, 2016 when 22 people died.

Arsovska, who chaired the emergency meeting of the Unit for Protection and Rescue of the City of Skopje, said that all teams have been mobilised on the ground, including the Skopje’s fire brigade, which managed to save over 20 people.

“Teams made up of representative of public enterprises are cleaning up on the ground and will remain on the critical locations until the normalisation of the situation,” Arsovska said in the statement.

Director of the Crisis Management Centre, CUK, Stojance Angelov told Telma that they received over 400 calls from citizens about damage caused by the storm.

The management of East Gate Mall in Skopje decided to close the shopping centre to visitors after it was flooded.

“As a result of the bad weather conditions in Skopje, there was a spill of water from the storm drain on the street network, which caused flooding of the underground levels of the mall. In these conditions, the management decided to close the mall and to evacuate visitors and employees,” TV21 reported.

Visitors’ cars will remain parked in the underground garage of the mall until the water runs out. Technical services are working to drain the water.

Depending on the progress of works the mall will remain closed until further notice, the broadcaster cited the management.

Other cities in North Macedonia were also affected by bad weather.

Heavy rains and thunder are expected until Friday.

bneGREEN: Fit for 55 – not fit for purpose
20 hours ago
bneGREEN: Slovenia’s Sigma Energy deploys device to convert sea waves into electricity
12 days ago
bneGreen: Southeast Europe’s first eco-mosque opens in Croatia
19 days ago
bneGREEN: Europe pays what it takes to bring in LNG but still cannot get enough
22 days ago
bneGREEN: Baltic states – except Russia – agree to aim for seven-fold increase in offshore wind
30 days ago