View in the vicinity of Kazakhstan's Kirovskaya mine. Coal accounts for 70% of the nation’s electric power output.
By Kanat Shaku in Almaty October 26, 2021

Kazakhstan must press ahead with decarbonisation projects that focus on natural gas as a transition fuel while lenders can still finance them. That was the message from European Bank for Reconstruction and Development (EBRD) president Odile Renaud-Basso during her visit to the Central Asian country last month.

For Kazakhstan, the energy transition demand is huge. Coal accounts for 70% of the nation’s electric power output. It cannot be quickly phased out with renewable energy sources alone. While Kazakh President Kassym-Jomart Tokayev has called for the construction of a nuclear power plant, the country is also looking at replacing coal-powered plants with gas turbines in the meantime.

Kazakhstan said last month it was aiming to achieve carbon neutrality by 2060. The country initially presented its commitments in December 2015 in Paris to reduce greenhouse gases in the amount of 15%-25% by 2030 within the framework of the new climate agreement. The government has since adopted a law "On amendments and additions to some legislative acts of the Republic of Kazakhstan on the support and use of renewable energy sources" aimed at stimulating investment activity in the renewables sector. That includes a measure that grants 50% compensation on the costs of an individual investor purchasing renewable energy installations of no more than 5 kW.

Observers see the technically possible potential of renewable energy sources in Kazakhstan as exceeding the projected level of electricity consumption in the country in the long term. However, it may be that market and climate change pressures require the Central Asian nation to act at a much faster pace, according to Renaud-Basso.

"It's very difficult to shift from coal to renewables quickly and you have this intermittence issue which will need to be addressed and at that point of time we believe gas will have a role to play in the transition, in particular, for example, for district heating projects," Renaud-Basso said during her visit to Kazakhstan.

"From the country's perspective, I believe there is a sort of a window of opportunity to get support, to finance gas projects," she added. "It is possible now but it may not be possible for decision-makers in a few years."

Minister of Energy Nurlan Nagayev said at the end of August that Kazakhstan is currently pursuing a number of decarbonisation activities, including a reduction in gas flaring, the lowering of greenhouse gases emitted at refineries, the development of renewable energy sources and power industry restructuring.

The authorities were specifically working on introducing a domestic carbon tax on energy consumption to avoid the full payment of a carbon tax in the EU, Nagayev said on August 31 at an international conference on best practice in Kazan.

"We further consider introduction of a domestic carbon tax on consumption of energy resources, import and export carbon duty and creation of the Carbon Fund. All that will make it possible to avoid full payment of the border carbon duty in the EU and allocate funds received from the carbon tax for implementation of climatic projects to achieve the goal of deep decarbonisation of the economy," the press service of the energy ministry cited the minister as saying.

VTB Capital commented on the carbon tax developments in a note, saying that "Kazakhstan currently has one of the most advanced carbon legislations among CIS countries, with the existing ETS covering more than 40% of emissions, national targets envisioning CO2 neutrality by 2060 and major growth in the share of renewable energy in the electricity system (from 11% currently to 30% by 2030 and 50% by 2050)."

"Nevertheless, Kazakhstan, despite lowering its GDP carbon intensity by more than 60% in 30 years, also still has one of the most carbon-intensive economies in the world, with CO2/GDP 13% higher than Russia and 3.6 times higher than the EU," VTB added.

According to VTB, launching a carbon tax on electricity purchases might lead to a boost in Kazakhstan's electricity imports from Russia, which has a CO2 electricity footprint lower than that of Kazakhstan.

"Launching a carbon fund might lead to substantial growth in the green financing market in the country, lowering the cost of financing for green projects and leading to price neutrality between fossil fuels and renewable electricity," VTB noted.

Cutting down coal consumption will create a new set of problems for Kazakhstan—particularly in the form of excess coal production, which Kazakhstan would no longer use to meet domestic needs. Around 90% of coal mined in Kazakhstan is locally consumed and sold at state-regulated prices that stand approximately 30% lower than export prices. Only around 4% of Kazakhstan's coal is currently exported.

An article by Eurasianet recently suggested that Kazakhstan may find new opportunities in neighbouring China's coal shortage crisis. China is the world's largest consumer of coal and Kazakhstan might be able to offload some of its own coal to its giant neighbour before eventually phasing it out.

The Association of Mining and Metallurgical Enterprises, a lobby group, told the Kursiv business newspaper on October 4 that Kazakhstan's switch to gas and renewables from coal would free up coal for export.

Given Kazakhstan must overcome imposing difficulties to achieve a quick transition to renewables, the Kazakh president has been carefully attempting to convince the ex-Soviet state’s population that the only way to avoid an energy crisis is to accept nuclear energy. Accepting nuclear energy is not easy for many Kazakhs aware of the tragic consequences that befell many people who were exposed to nuclear fallout and radioactive dusts from Soviet-era nuclear bomb tests in the country. 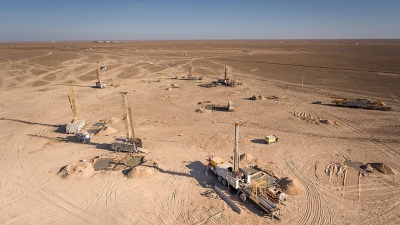 Wellfield development drills at Inkai Uranium Mine in Kazakhstan. The country accounts for 12% of the world's uranium resources (Image: NAC Kazatomprom JSC, CC-BY-SA 4.0).

In September, Tokayev warned that Kazakhstan would be experiencing electricity shortages by 2030. "Global experience suggests the most optimal solution—the peaceful atom," Tokayev said in his State of the Nation address.

Russia's Rosatom has repeatedly offered to construct a nuclear power plant in Kazakhstan's Almaty region and Kazakh authorities appear to be largely gravitating towards the offer, despite publicly stating that no decision on the plant's construction has yet been made.

Kazakhstan accounts for 12% of the world's uranium resources and is the world's largest producer of uranium. It is also home to a major nuclear fuel pellets-production plant and is aimingto eventually to sell value-added nuclear fuel rather than just uranium.

If the authorities can overcome the issue of public distrust towards nuclear projects seen as posing potential dangers to the population, the construction of a nuclear power plant might become seen as an inevitability, providing a short-cut towards switching to green energy and eventual carbon neutrality.