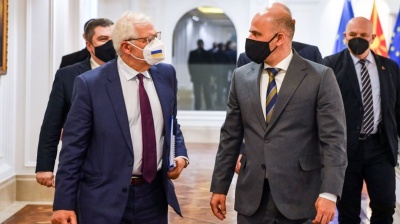 The EU's High Commissioner Josep Borrell said on March 14 in Skopje that the EU should launch accession negotiations with North Macedonia and Albania as soon as possible to strengthen security in the Western Balkans, but underlined he cannot promise a date.

Borrell underlined that the Russian invasion of Ukraine should be a turning point to reinvigorate the EU enlargement process.

Skopje, where Borrell arrived a day earlier, is the first leg of his Balkan tour, during which he will also visit Albania and Bosnia & Herzegovina.

“North Macedonia has clear expectations to start EU negotiations, and rightly so. We welcome the new impetus between Sofia and Skopje for a mutually acceptable solution. It is high time to resolve long standing bilateral issues,” Borrell said in a tweet, following a meeting with Prime Minister Dimitar Kovacevski.

Borrell added that North Macedonia and the Western Balkans are a strategic priority for the EU.

“The fact that North Macedonia is completely in line with European values is a proof that its place is in the European family. Promise, I cannot promise anything, but I assure you that we are doing everything to start negotiations with North Macedonia and Albania,” Borrell said.

In Skopje, EU foreign policy’s chief discussed the wider implications of the war against Ukraine for the region, and how to best support stepping up its resilience.

Borrell also said that the EU will propose enhancing the security and defence of the Western Balkans region due to threats from Russia, following the invasion of Ukraine.