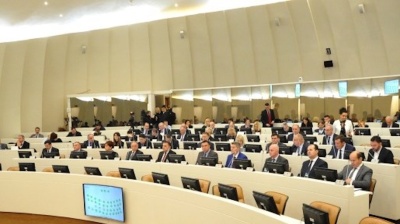 Zoran Tegeltija’s nomination was backed by MPs from all Bosnia's main ethnic parties after months of tense negotiations.
By Denitsa Koseva in Sofia December 5, 2019

The Bosnian parliament’s House of Representatives approved the appointment of Serb Zoran Tegeltija as the next state-level prime minister on December 5, ending a 14-month political deadlock that has persisted since the October 2018 general election.

Tegeltija’s nomination was backed by all main ethnic parties in the country after months of tense negotiations.

In his speech to parliament, Tegeltija said he would form a government as soon as possible and would implement much needed reforms to unlock the country’s EU membership path and secure a new deal with the International Monetary Fund (IMF).

A government should be formed by the end of the year. This could lead to renewed talks with the IMF on a loan deal and to more support from the international community for reforms in Bosnia & Herzegovina.

Tegeltija, an ethnic Serb and a member of Milorad Dodik’s Alliance of Independent Social Democrats (SNSD), was supposed to be nominated in August, following an agreement reached by Bosnia’s three main parties to form a state-level government as long as Bosnia remained committed to “advancing the relationship with Nato without predicting future decisions in relation to membership of Bosnia & Herzegovina.”

However, Dodik, the Serb member of Bosnia’s tripartite presidency, blocked the process, as he opposes Bosnia’s advancement towards Nato membership, delaying the nomination of the prime minister by several months.

The other two members of the presidency said they would not back Tegeltija’s nomination if Dodik refused to first sign the Annual National Programme (ANP) to be sent to Nato.

Unlike Dodik, the leaders of the two other main ethnic parties — Bakir Izetbegovic of the Bosniak Party of Democratic Action (SDA) and Dragan Covic of the Croatian Democratic Union (HDZ) — support the country’s eventual Nato membership.

The country has already been implementing a Nato agreement (IPAP) for several years. These agreements are signed for two years and the latest expires in December. Nato activated Bosnia's Membership Action Plan (MAP) last year, but the country has failed to move forward owing to Dodik's objections.

Under a compromise reached by the presidency, a programme of reforms demanded by Nato as part of Bosnia's process of integration with the alliance but previously blocked by the Bosnian Serbs, should be sent to Nato a day after the parliament confirms Tegeltija as prime minister.

Western Balkans has potential for up to €20bn wind energy investment says new report
OUTLOOK 2020 Bosnia & Herzegovina
MITTELEUROPA: Following the French hit on Western Balkans, all eyes on Croatia and Germany in 2020

Ukraine’s population fell behind that of Poland for the first time as an electronic census revealed the number of citizens had fallen by some 5mn people to 37.289mn since the last census in 2000.

The labour shortages that have threatened to limit economic expansion in Central and some parts of Southeast Europe have started to ease in some countries, with increased labour migration a contributing factor.

Ukraine’s domestic bond market got off to a strong start in 2020 as heavy bidding at the weekly auction on January 22 depressed yields to 10%. A year ago Ukraine bonds were yielding 19%.

Any potential investor who invests more than $100mn in Ukraine, will get a personal "guardian" from the government, according to President Volodymyr Zelenskiy, who is at the Davos conference to talk up Ukraine’s investment case.

Analysts are increasingly keen on the stocks of Russian national air carrier Aeroflot after it had a terrible 2019.