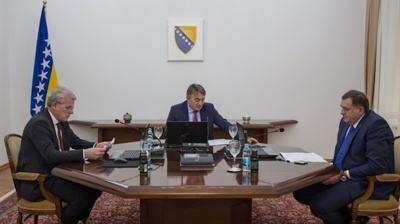 The move came as top Bosnian politicians finally agreed on sending a reform programme to Nato, resolving a dispute that had held the nomination up by several months.

The end of the lengthy political stalemate could finally make it possible for Bosnia to progress with its application for EU candidate status and move towards striking a new deal with the International Monetary Fund (IMF).

Bosnia’s current deal, which was supposed to provide the country with much needed cheap cash, was put on hold in 2017 as political disagreements froze key reforms. The IMF’s resident representative Andrew Jewell said recently that the fund will scrap the current deal — which is due to end soon — and propose a new one.

Sarajevo would have to agree on a new pack of reforms to get another deal with the fund, which was seen as virtually impossible without a new government in place.

The delay in forming a government, as well as disputes among top politicians, had also held up Bosnia’s efforts to secure EU candidate status after it submitted its application back in 2016.

According to the presidency’s November 19 statement, the three presidents – Milorad Dodik, Sefik Dzaferovic and Zeljko Komsic, who are the Serb, Bosniak and Croatian members of the institution respectively – agreed that the country will send a programme of reforms to Nato on the day after the parliament votes on Tegeltija’s appointment.

Tegeltija, an ethnic Serb and a member of Dodik’s Alliance of Independent Social Democrats (SNSD), was supposed to be nominated in August, following an agreement reached by Bosnia’s three main parties to form a state-level government as long as Bosnia remained committed to “advancing the relationship with Nato without predicting future decisions in relation to membership of Bosnia & Herzegovina.”

However, Dodik blocked the process, as he opposes Bosnia’s advancement towards Nato membership, delaying the nomination of the prime minister by several months.

For their part, Dzaferovic and Komsic said they would not back Tegeltija’s nomination if Dodik refused to first sign the Annual National Programme (ANP) to be sent to Nato.

Unlike Dodik, the leaders of the two other main ethnic parties — Bakir Izetbegovic of the Bosniak Party of Democratic Action (SDA) and Dragan Covic of the Croatian Democratic Union (HDZ) — support the country’s eventual Nato membership.

Local media quoted Dzaferovic as saying that the reform programme that will be sent instead of the ANP has the support of Nato and the international community.

The country has already been implementing a Nato agreement (IPAP) for several years. These agreements are signed for two years and the latest expires in December. Nato activated Bosnia's Membership Action Plan (MAP) last year, but the country has failed to move forward owing to Dodik's objections.

Western Balkans has potential for up to €20bn wind energy investment says new report
OUTLOOK 2020 Bosnia & Herzegovina
MITTELEUROPA: Following the French hit on Western Balkans, all eyes on Croatia and Germany in 2020