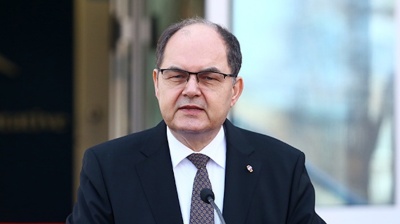 Bosniak political leaders are calling on their supporters to gather in front of the Office of the High Representative, Christian Schmidt, to protest against planned changes to the electoral law.

Schmidt’s changes aim to clear up years-long disputes over the election of MPs and members of the tripartite presidency in the Muslim Croat Federation, one of two autonomous entities in Bosnia & Herzegovina. They would also set a specific timeframe in which the upper chamber of parliament can rule on a law that has already been adopted by the lower chamber.

Bosnia is divided into two autonomous entities, Republika Srpska and the Muslim Croat Federation, and consists of three constituent peoples – the Bosniaks (Bosnian Muslims), Croats and Serbs. Representatives of each of the three peoples must be elected to the state-level parliament.

According to N1, Schmidt intends to impose amendments that would require the election of Croat or Bosniak MPs from each canton only if at least 3% of its population is from either of these peoples.

The census would prevent filling the Croat group in the upper house of parliament with deputies from cantons where the number of Croats is symbolic. On the other hand, it would secure election of Croat representatives from the cantons where the population is predominantly Croat.

However, the Bosniaks claim the changes would favour the Croats and would harm the Bosniaks. Protests against Schmidt’s plans were announced by the Party of Democratic Action (SDA) – the biggest Bosniak party – as well as other Bosniak formations.

Meanwhile, the Islamic Community of Bosnia wrote to Schmidt, urging him to give up the planned changes as they would lead to further ethnic rifts.

N1 quoted the Islamic Community as saying in a letter that it was unacceptable to insist on making the votes of one ethnic or national group, in this case, Bosniaks, but also Muslim minorities of Albanians or Roma, less valuable than those of some other peoples.

“We appeal to the high representative and those who gave in to pressure under blackmailing policies in the neighbourhood and blockades being implemented by those who are now being given even greater powers, to continue with the same policies of division and segregation, to think about the far-reaching consequences of their decisions,” the statement said.

In mid-June, the lower chamber of Bosnia’s state-level parliament, the House of Peoples, adopted changes to the electoral law, which were proposed by the Bosnian Croat representatives. However, the process has been blocked since then.

According to the draft law, the Croat member of the Bosnian presidency is will be elected by electors, who will be picked based on who won the most votes in at least three of the five Croat majority cantons – the Herzegovina-Neretva (HNK), Central Bosnia (SBK), West Herzegovina ZHK), Livno and Posavina cantons.

The electors should be picked based on a new method in the House of Peoples of the Federation as well, so that out of 17 representatives of Bosnian Croats 16 are elected from cantonal assemblies by electing four from the HNK, three from SBK and ZHK, and two each from the Livno, Zenica-Doboj and Posavina cantons. Tuzla Canton, Sarajevo Canton, Una-Sana Canton and Bosnia-Podrinje Canton would jointly get one Bosnian Croat representative, according to the draft bill.

Foreign investment has transformed Eastern Europe, says wiiw report
Moldova attends first Nato summit but says membership is not an option
European Parliament calls for ‘reenergised’ enlargement process – but only for countries that back Russia sanctions