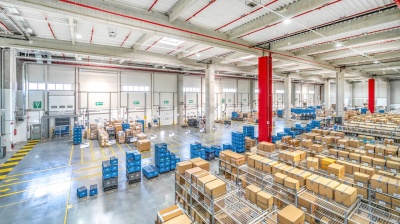 This year has all the prerequisites to be a formidable year for the industrial space market in Romania, after 2020 proved to be a record year with over 930,000 sqm traded, according to a report released on March 25 by the real estate consultancy firm CBRE.

After the stock of industrial spaces in Romania increased by over 570,000 sqm to more than 5mn sqm in 2020, development continue this year, driven by the countrywide vacancy rate of only 8%, the report said.

The list of the largest transactions in 2020 includes the country’s biggest supermarket chains, home and DIY retailers Ikea, Mobexpert and Kingfisher as well as online retailers eMAG and e-Pantofi.

Approximately 400,000 sqm of industrial space  is currently under construction at the national level, an area of over 60% being already pre-leased, according to CBRE Research data.

With an existing stock of 2.3mn sqm, Bucharest and its surroundings have attracted the largest volume of new developments: over 140,000 sqm worth of industrial spaces are under construction.

The western region of the country, including Timisoara, Arad, and Cluj-Napoca, is the second biggest industrial submarket with a stock of 1.2mn sqm. In this area, the developers have approximately 130,000 sqm under construction, of which over 100,000 sqm are in Timis county.

Another dynamic region in terms of new projects is central Romania, which includes cities such as Deva, Sibiu, Targu-Mures and Brasov, where the stock of space measures about 670,000 sqm and will increase by 10% this year alone.

Another report from Colliers International looking at the broader Central and Eastern Europe region also takes a bullish stance on Romania. “Romania, as the second largest CEE country by population and area, is now seeing greater levels of development activity then ever before. Developers are looking to unlock the great potential the country has to offer,” the report said.

Across the region, Colliers noted “very strong activity” in the market for industrial and logistics space in 2020, with demand at around 9mn sqm, a year-on-year increase of almost 25% on average. The highest levels of activity were recorded by companies from the third party logistics sector, followed by retail and e-commerce.