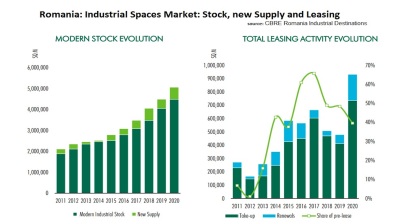 Romania is the third market in Central and Southeast Europe for industrial and logistics space, after Poland and the Czech Republic, and it has a very good outlook for further development Rodica Tarcavu, partner, industrial agency, at Cushman & Wakefield Echinox, told a conference dedicated to the sector.

She expressed expectations for a stock of 6mn square metres in the country, with a high concentration in the Bucharest area accounting for 50% of the total. At the moment, the stock (logistics only) is about 2.5mn sqm, “but we could reach 3mn sqm next year, demonstrating the still great potential of this development area," added Tarcavu.

The modern stock of industrial spaces (logistics included) in Romania has exceeded the threshold of 5mn sqm in 2020 and is to reach approximately 5.5mn sqm this year, over 60% of the area under construction being already pre-leased, according to CBRE Romania.

At the national level, approximately 400,000 sqm of industrial spaces are currently under construction, an area of over 60% being already pre-leased, according to CBRE Research data.

Thus, after in 2020 the stock of industrial spaces in Romania increased by over 570,000 sqm, the development activity continues to be alert this year as well, driven by the degree of vacancy of only 8% nationally.

With an existing stock of 2.3mn sqm, Bucharest and its surroundings, the Ilfov area, continue to attract the largest volume of new developments, with over 140,000 sqm under construction.

In the next place, with a stock of 1.2mn sqm, is the northern and northwestern region of the country, which includes Timisoara, Arad and Cluj-Napoca. In this area, the developers have approximately 130,000 sqm under construction, of which over 100,000 sqm are in Timis County, according to CBRE’s Romania Industrial Destinations report.

In one of the latest moves in the market, Dutch logistics spaces operator Raben announced that it plans three new warehouses in Romania in 2021, on top of the seven units it already operates on the local market, according to Tomasz Niezwicki, Raben's chief for Central and Eastern Europe.

"Companies will return from Asia to Europe. We need to be prepared for that moment,” said Niezwicki. The Dutch group operates in 13 countries and serves industries such as retail or automotive. Logistics companies are stepping up the pace of expansion in the Southeast Europe region, as it is a viable solution for manufacturers looking to relocate operations closer to the European market, reported Reuters, putting Raben’s planned investment in perspective.

"There is potential to attract production or logistics activities in Romania, especially if we consider the cost of labor, comparable between Romania and China, for example," reads the 2021 report from the real estate consulting company Colliers International.

Foreign investors were attracted by yields that were between 8% and 10% in industrial and logistics areas in Romania and Bulgaria in 2020, compared to 5-7% in Poland, the Czech Republic, Slovakia and Hungary, or 4.5% in Germany or France, according to Colliers.