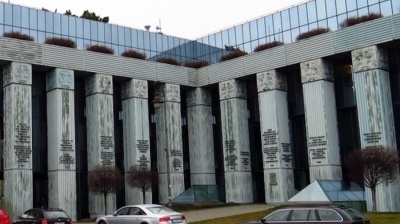 Poland's supreme court. PiS' overhaul of the judiciary included retirement for the court's judges.
By Wojciech Kosc in Warsaw July 22, 2019

The European Commission on July 17 gave Poland two months to change the new disciplinary regime imposed on the country’s judges by the ruling Law and Justice (PiS) party. Brussels says the measures of disciplining judges, passed in 2018, impose political control over the judiciary branch and compromises its independence.

The Commission continues to apply pressure on PiS, which has overhauled much of the judiciary branch since taking over power in 2015. The reforms’ different aspects – such as retirement provisions for the judges of the Supreme Court and the common courts – landed Poland in the Court of Justice of the EU, the bloc’s top court, giving the ruling party fuel to stir anti-EU and nationalistic sentiment at home.

PiS says the reform aims at cleansing courts of communist-era judges and will also make courts more efficient and friendlier to rank and file Poles.

“The new disciplinary regime undermines the judicial independence of Polish judges and does not ensure the necessary guarantees to protect judges from political control, as required by the Court of Justice of the EU,” the Commission said in a statement.

The Commission pointed out that Polish judges could be disciplined based on the content of their judicial decisions or for requesting preliminary rulings from the European Court of Justice.

In one well-publicised case, a judge was disciplined for lifting arrest of a person with a mental disability who was not granted a defence attorney.

“Moreover, the new disciplinary regime does not guarantee the independence and impartiality of the Disciplinary Chamber of the Supreme Court, which is composed solely of judges selected by the National Council for the Judiciary, which is itself appointed by the Polish Parliament,” the Commission said.

Poland tried to downplay the Commission’s move. “It would be quite strange for the outgoing European Commission to make such a decision,” deputy Prime Minister Jacek Sasin told US-owned broadcaster TVN24. “Let’s wait for the new Commission,” he added.

But the new Commission is unlikely to let Poland go. "The next Commission, under the presidency of Ursula von der Leyen, I have no doubt, will be as forceful, as concrete and as determined as the present Commission, no doubt whatsoever,” Frans Timmermans, the Dutch politician who is continuing as the Commission's vice president for rule of law, said in Brussels on July 19, New Europe reported.